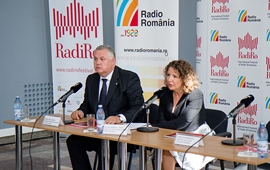 Five European Radio Orchestras in Eight Concerts at the Second Edition of the RadiRo Festival!

Tuesday, 16 September 2014 , ora 10.42
Between 20th and 27th September, Radio Romania holds the second edition of the RadiRo Festival, the only European musical event which aims to bring to the public's attention the extraordinarily varied repertoire, the actuality and artistic virtuousness of the radio symphony ensembles in Europe.

During the eight festival days, five radio orchestras from Finland, the Czech Republic, Germany, France and Romania will perform at the Radio Hall, in an artistic programme dedicated to Richard Strauss' music, 150 years after the birth of the great German composer.

Hence, the opening concert of the Festival will take place on Saturday, 20th September, at 19.00 and it will be held by the Finnish Radio Symphony Orchestra, which will perform on a Romanian stage for the first time, together with two renowned names of the international musical world: the American conductor Joshua Weilerstein and the pianist Jonathan Biss. Established in 1927, in the roaring years of the European radios, the Finnish Radio Symphony Orchestrahas tours all over the world and is highly appreciated in its country of origin, which has more orchestras per capita than any other country in the world.

The National Radio Orchestra will be the protagonist of the second evening of the Festival, on Sunday, 21st September, when it will perform at home, at the Radio Hall, under the baton of this edition's Honorary Director, the conductor Cristian Mandeal. Having conducted over 1.000 concerts in thirty-five countries on four different continents, Cristian Mandeal creates in his concerts a real energy flow, a special chemistry among the conductor, the orchestra and the audience. The special guest of the evening will be the soprano Katarina Jovanović, a familiar presence to music lovers through her regular appearances on the television channel MEZZO.

The third and the fourth day of the RadiRo Festival, Monday, 22nd September and Tuesday, 23rd September, will bring on the stage of the Radio Hall, one of the top radio orchestras in Europe: the Prague Radio Symphony Orchestra, which will be joined in Bucharest, by its lead conductor, Ondrej Lénard and the pianist Jan Simon, two weighty names in the Czech Republic and abroad. At the music rack of the first concert of the the Prague Radio Symphony Orchestra, there will be the conductor Tiberiu Soare, the leader of the young generation of Romanian conductors, highly esteemed by both the public and specialists, for his elegance and the flexibility of his musical vision. The pianist Horia Mihail, concertist, soloist of the Radio Orchestras and Choirs and protagonist of the Wandering Piano Tour will be the guest soloist of the second evening of the Prague Radio Symphony Orchestra in a Strauss & Dvořák programme at the RadiRo Festival.

The festival flavour will continue on Wednesday, 24th September and on Thursday, 25th September, with two concerts of the Stuttgart Radio Symphony Orchestras, an important German ensemble, which was conducted by the famous Sergiu Celibidache in the '70s. The Orchestra will be accompanied by its lead conductor Stéphane Denève and will perform together with two high class soloists: the violinist Nikolaj Znaider, one of the most flexible contemporary musicians and the soprano Ruxandra Donose, who has recently been awarded a prize by the Gramophone prestigious magazine.

The National Radio Orchestra will come back on the stage of the RadiRo Festival on Friday, 26th September, under the baton of the American conductor Case Scaglione and in the company of a violinist for whom music knows no limits: Alexandru Tomescu. With his famous 1702 Stradivarius Elder - Voicu violin, with which he crossed Romania on the Stradivarius Tours and could be listened to on big concert stages around the world, Alexandru Tomescu is now one of the big Romanian violinists with a calling, soloist of the Radio Orchestras and Choirs, internationally renowned and appreciated. He will perform on the RadiRo stage in a Debussy, Strauss & Brahms programme, in a concert conducted by Case Scaglione, associated conductor of the New York Philarmonic. With a fully ascending career, Scaglione will be at the RadiRo Festival, in Romania for the first time, after a series of concerts conducted this year together with great orchestras from the USA, China and Spain.

RadiRo will close its gates with an extraordinary concert performed by the Orchestre National de France, led by the conductor Vassily Sinaisky, with the participation of the violinist Vadim Gluzman, two high-calibre presences at this year's edition of the Festival. The first and the most important orchestra of the French Radiodiffusion, Orchestre National de France, has recently celebrated eighty years of existence and continues to approach a vast symphonic repertoire, from the great French composers to contemporary music and is one of the most active European radio orchestras.

Musician Vassily Sinaisky's name is associated with the international re-launching of the Balşoi theatre in Moscow, in 2010, after five years of reconditioning works. The soloist of the last 2014 RadiRo evening, violinist Vadin Gluzman plays on a 1690 Stradivarius Leopold - Auer violin, was been promoted by Isaac Stern at the beginning of his musical career and currently he is a very requested violinist in the United States and Europe.

'I am deeply honoured to be together with you at the Radio Hall, at the second edition of the International Festival of the Radio Orchestras. In a world in which globalization is part of our lives, what other more authentic way of expression than music could we find to dim the boundaries, to get people closer together, to make them resonate, to make them vibrate without pronouncing any words, just by listening? We have succeeded - and I am saying this with pride and full responsibility - to bring symphonic music to Bucharest, to offer it to the audience in concert halls and to then give it back to the whole world; and we are doing this by broadcasting the concerts on Radio Romania Music, Radio Romania Culture and the broadcasting platforms of the European Broadcasting Union and Asia Pacific Broadcasting Union, which number a potential audience of billions of listeners.'

'In its second year, the RadiRo Festival has rapidly gained a much deserved reputation in the autochthonous cultural landscape. We are, undoubtedly, speaking about a major musical event, unprecedented in the so colourful landscape of the similar festivals in the world, held, as you can see! - rhytmically, once every two years. Likewise salutary is the international aspect of the event, which reunites every time reputable European radio orchestras, having the same specific profile and the same educational and promotional destination. I wholeheartedly applaude this spendid initiative of Radio Romania and I wish the RadiRo Festival a neverending life rich in events!'

Jan Simon, pianist and director of the ensembles, festivals and competitions carried out by the Czech Republic Radio:

'I believe that the set-up of this festival is a superb idea. We have tried to do something similar in Prague five years ago with the 'Radio Autumn' Festival. We then had as guests the Radio Symphony Orchestras in Leipzig, Hilversum and Budapest. We were not able to obtain a sponsorship for the second edition. I am glad that Radio Romania took this idea forward and especially at this level; at this second edition of the International RadiRo Festival, the National Orchestra of France, Vassily Sinaisky or Nikolaj Znaider will perform. You have managed to set up an extraordinary festival.'

'The uniqueness of this festival is given by the fact that it only features radio orchestras and not philarmonics,lyric drama orchestras or similar symphony orchestras. It is important because the public radio at European level has generated a musical movement, a very important artistic movement and all over Europe the public broadcasting societies do not only have a mass-media related mision, but it also has this cultural mission, which, to a certain extent is supported by the radio orchestras and choirs of every public radio. Romania can boast about having a powerful entity in this sense, namely, a symphony orchestra, a room orchestra, an academic choir, a child choir, a jazz orchestra and a traditional music one, and therefore we can say we are very well represented among the public radios in Europe.'

' We have been honoured to support this unique festival in Europe, from its very first edition, in 2012. Moreover, what makes us glad today is seeing that the RadiRo Festival is becoming a reference point on the musical map of Romania and Europe, from one edition to the other.'

'We have stood by RadiRo in 2012 and we continue to be the partners of the Festival at this edition, as well . We are proud and honoured that Dacia cars will again carry great names of classical music to the concert hall.'

Event carried out under the auspices of the Romanian Government

*The last tickets for the festival concerts are available on bilete.ro, at the offices of the Romanian Post, at the Inmedio Stores which carry the sign Bilete.ro, at the Germanos stores and the Box Office of the Radio Hall.

* The access into the Radio Hall for the scheduled concerts during the Festival is allowed until no later than 18.50. Inasmuch as the concerts will be filmed and recorded, children's access below the age of six is prohibited. The use of photo cameras and/or video recorders is prohibited during the concerts.