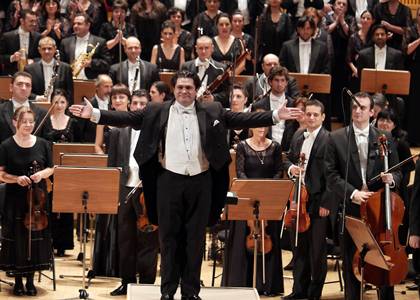 Cristian Măcelaru and Gabriel Croitoru Invite Us to an Imaginary Musical Journey at the Radio Hall!

Monday, 24 November 2014 , ora 10.19
Two Romanian musicians of the highest artistic level meet on the stage of the Radio Hall: Cristian Măcelaru, associated conductor of the Philadelphia Philarmonic, who has a beautiful career, especially in the U.S.A. and Canada and the violinist Gabriel Croitoru, who owns the right to play the Guarnieri violin, which is a Universal heritage, that belonged to George Enescu and is now under the administration of the 'George Enescu' National Museum.

The concert scheduled for Friday, 28th November, at 19:00h, the two artists, together with the National Radio Orchestra, will put forward to you a marvelous imaginary musical journey throughout the world! The evening will open with a work inspired by the Romanian folklore - Three Pieces for String Orchestra ( Constantin Silvestri ). The itinerary will then continu with a composition by Mozart - Concerto for Violin and Orchestra No.5, whose ludic accents and the novel exotic, oriental flavour caused it to also be named Turkish Concerto. The event will close with Symphony No. 3 - Scottish, composed by Felix Mendelssohn.

Symphony No. 3 is a score directly influenced by the journey impressions which the composer lived in 1829, when he visited the beautiful area of the British Isles; in fact, Mendelssohn dedicated his work to Queen Victoria.

... left Romania when he was seventeen years old, so that he could study musical art in the U.S.A. and today his activity as a conductor is in full ascension. He started his career together with the Philadelphia Orchestra and in the 2010-2011 season he was appointed assistant conductor of the same orchestra, after which he was offered the Sir Georg Solti Emerging Conductor Award.

...obtained, through a contest, beginning with the year 2008, the right to play on the Universal heritage Guarnieri violin, which belonged to George Enescu and which is now under the administration of the 'George Enescu' National Museum.

With over a thousand appearances on stage, the violinist Gabriel Croitoru is a musician with a rich presence in the musical life: he is a soloist concertist of the Radio Romania Orchestras and Choirs, of the Ploiesti Philarmonic and first violinist of the Transylvanian Quartet of the Cluj-Napoca Philarmonic.

Gabriel Croitoru performed as a soloist in the company of important orchstras all over the world, such as: the London Royal Philharmonic, the Queen Sophia Chamber Orchestra, the Symphony Orchestras in Monte Carlo, Thessaloniki, Malaga, Sevilla, Galicia, Pamplona, Cannes, Lyon and so on. He was applauded at recitals in: France, Spain, Germany, Belgium, Holland, Italy, China, Bulgaria and the U.S.A. Beginning with 2011 he held various wide scope national tours under the name of The Duel of Violins (together with Liviu Prunaru and Horia Mihail) and George Enescu's Violin Travelling to Rural Areas (together with Horia Mihail).

The concert can be listened to live on all the frequencies of Radio Romania Culture and Radio Romania Music in the country and in live streaming on the internet on the following websites: www.radiorormaniacultural.ro and www.romania-muzical.ro.

The tickets are available on www.bilete.ro, at the Romanian Post offices, in the Inmedio Stores which carry the tag Bilete.ro, in the Germanos Stores and at the Radio Hall Box Office.