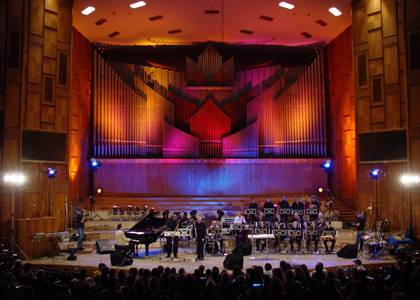 Thursday, 4 December 2014 , ora 11.29
Tuesday, 9th December (19:00) at the Radio Hall, the Radio Big Band, conducted by Ionel Tudor, offers you a beautiful musical gift before the winter holidays! You will attend a concert dedicated exclusively to blues, with the participation of three artists with numerous national and international performances: Hanno Höfer, Mike Godoroja and Berti Barbera.

An artist with a complex activity in various fields (director, producer and musician), Hanno Höfer has also chosen multiple paths in music: guitar, concertina and voice. His musical experience is mainly connected to the bands Nightlosers and Orient Express of the jazz pianist Harry Tavitian. Hanno Höfer tells us in his interviews that his passion for music began with a double album of the Newport Folk Festival in 1965, comprising all the important blues and rock musicians in the USA at that time. It was an experience that made him want to pursue a music career.

Mike Godoroja has performed in various bands, such as Mike Godoroja & Blue Spirit, Double Fantasy, Blue Spirit and others and has a rich discographic activity, out of which we mention albums like Hippie with Diamonds, Balkanic Zeppelin, The Neighbour's Goat, etc. A well-known radio and television show producer in the field of blues, jazz and rock and an artistic producer for jazz shows, Mike Godoroja has also produced the albums of important artists like Johnny Răducanu, Iris, Mircea Tiberian, Felicia Filip, etc. With a flexible vocal range and the ability to use multiple percussion instruments, Berti Barbera manages to offer an original, spectacular and accessible form to any musical piece he plays. Apart from his activity on the stage, he is the author of many professional articles in magazines on the Romanian market and has produced and hosted various radio and television shows.

As a matter of fact, 'the story' behind the Radio Big Band and blues music has deeper 'roots': apart from the blues concerts presented during the music seasons of the Radio Hall, in 2002, an album dedicated entirely to this genre and entitled RADIO BIG BAND BLUES - Let The Good Times Roll was released by the 'Casa radio' Publishing House.

Our host for the evening will be Florian Lungu, himself an 'incarnation' of Romanian jazz music, whose career, loyally devoted to this genre, has covered thousands of radio and television shows, a considerable number of published articles, many jazz festivals and concert presentations, as well as some compositions performed by well-known soloists and bands.

Tickets are available on bilete.ro, in the offices of the Romanian Post Office , in the Inmedio stores bearing the 'Bilete.ro' logo, in the Germanos shops, as well as at the Radio Hall Box Office.