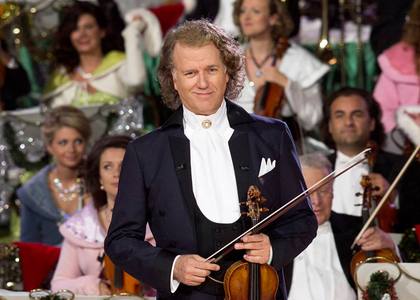 Wednesday, 10 December 2014 , ora 9.48
Record: the 12.500 tickets for the first concert of the famous violinist André Rieu in Romania were sold out in only three hours after they were placed on sale. The most rapid sale of an André Rieu concert, ever recorded.

The tickets for the first concert of the famous violinist André Rieu in Romania (13th June, 2015, Constituției Square, Bucharest), placed on sale today, 10th December, at 09.00 were sold in just 180 minutes.

André Rieu announces that the first concert will take place on Friday, 12th June, 2015. Tickets are available on the Eventim website, right from this moment. The sales for the live concert performed by the famous violinist André Rieu in premiere in Romania in Constituției Square, Bucharest, together with his Johann Strauss Orchestra orchestra, and announced during an extraordinary press conference held at the Romanian Athenaeum on Tuesday, 9th December, 2014, have registered a sales record, being exhausted in just three hours.

As a consequence of this success, André Rieu announced another concert, on 12th June, 2015, which will also take place in Constituție Square, Bucharest. Tickets have already been placed to sale in the Eventim network.

"Dear Romanian fans, I am overwhelmed by the warm receipt you offered me yesterday, at my arrival in Bucharest, to announce our first concert in Romania. You received us with open souls and we shall open our hearts to you. I cannot wait to see you again in June, in Constituției Square, for several magic evenings, full of music, dance and romanticism, at the stars' light!" André Rieu told his Romanian fans.