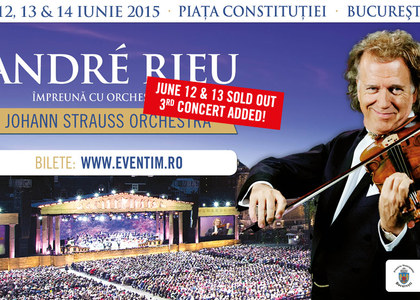 Thursday, 11 December 2014 , ora 9.42
The famous violinist André Rieu broke the record for the best-selling concert in Romania, with tickets for the second concert selling out this afternoon. That was all after his initial concert had been sold out in less than three hours, making it the fastest selling André Rieu event on record.

Tickets for the second concert of the famous violinist André Rieu in Romania (Friday, 12th June, 2015, Constitution Square, Bucharest), on sale today, 10th December, at 13:00, were sold in record time this afternoon. Subsequently, André Rieu announced a third concert for Sunday, 14th June. The tickets are available through the Eventim network.

The famous violinist André Rieu today broke the record for the best-selling concert in Romania, where he will perform for the first time in Constitution Square on June, 2015. In only a few hours after their release, the 12.500 tickets for the second concert announced today also sold out. The tickets for the first concert sold out in only 3 hours.

A third André Rieu concert will take place in Constitution Square on Sunday, 14th June, 2015. Tickets are available through Eventim network and the authorised partners.

'Dear Romanian fans, I'm overwhelmed by the warm welcome that I received yesterday upon my arrival in Bucharest to announce my first concert in Romania. You welcomed us with open hearts and we will open our hearts to you. I'm looking forward to seeing you all again, in Constitution Square in June, for some magical evenings full of music, dance and romance under the stars!', André Rieu said to his Romanian fans.