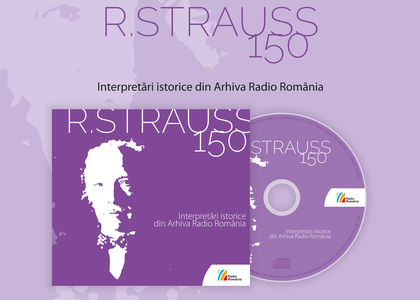 In addition to the national cultural marks, Radio Romania also promotes the universal artistic values and great personalities. Such an example is the Richard Strauss 150 album, through which the Radio Romania Culture Media Centre - the 'Casa Radio' Publishing House and the Cultural Heritage and Archives Service marks the one and a half centenary since the birth of the legendary composer.

The release of the compact disc will take place in the central foyer of the Romanian Radio Hall, on Friday, 19th December, 2014, during the concert intermission, namely, starting at 19:45. Musicologist Olga Grigorescu, who made the musical selection and who also is the author of the album's introduction, will also participate in the event.

The Richard Strauss 150 album was released in the Historical Interpretations from the Romanian Radio Archives series and propounds to the public a universal-national musical content of famous creations by Richard Strauss, performed by great representatives of the Romanian interpretative art, such as, soprano Emilia Petrescu and conductors Constantin Silvestri, George Georgescu and Emanuel Elenescu, all of them conductors of the Romanian Radio National Orchestra and the George Enescu Philharmonic Orchestra .