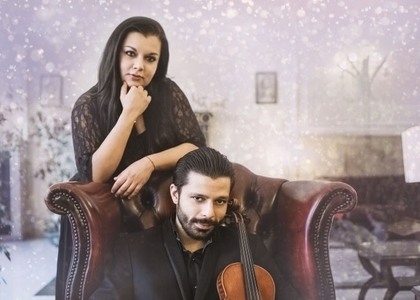 Radio Romania Music and the Cotroceni National Museum hosts the New Year's Concert performed by the violinist Răzvan Stoica and the pianist Andreea Stoica on Tuesday, 13th January 2015, starting at 19:00. A challenging programme for the beginning of the new year: from the passion of the tango in Astor Piazzolla's music to the romance of the Grand Duo, by Franz Schubert and the virtuosity of Fritz Kreisler's works - a programme bubbly like a glass of champagne, which we can raise to a bright new year's beginning .

Violinist Răzvan Stoica is among one of the most talented Romanian young musicians of the moment: he came to the attention of the international music world when he won the sole prize of the New Talent Music Competition, in Bratislava, which was conducted under the aegis of the European Broadcasting Union and in which Răzvan participated, at the suggestion of Radio Romania Music. Răzvan Stoica, who is twenty years old today, studied at the George Enescu Music Highschool and at the Royal Conservatory of Amsterdam, in the class of the well-known professor Ilya Grubert.

His trophy record contains almost thirty national and international prizes. Răzvan Stoica has been playing on a Stradivarius violin since 2009, violin which is dated 1729 and which he won in a music competition, where he fought against 170 counter-candidates and which took place in Strasbourg. .

Răzvan Stoica received the In memoriam Iosif Sava Award, which was offered to him by Radio Romania Culture and he opened the 2014-2015 season of the Radio Chamber Orchestra.

Răzvan Stoica has been part of the Stoica Duo, alongside his sister, pianist Andreea Stoica, since 1996. Hundreds of other concerts on some of the most important European and American stages and recorded albums for the Dutch recording company, Aliud, soon followed. The Passion&Virtuosity album, which was recorded by Răzvan and Andreea Stoica in the Radio Romania's recording studios, will be released by the Casa Radio Publishing House in December 2014. Răzvan Stoica founded the Stradivarius Camerata, a chamber orchestra, accompanied by which he plays in his European tours.

Răzvan Stoica and Andreea Stoica are living in Holland.

The complete programme of the recital in which they will perform at the Cotroceni National Museum on 13th January, 2015, contains: The Grand Duo in A major Op.162, by Franz Schubert, the Prelude and Allegro from the Viennese Caprice and the Tambourin Chinois, by Fritz Kreisler, the Polonaise de Concert in D major, by Henryk Wieniawski and Oblivion, by Astor Piazzolla.

Tickets are available on www.bilete.ro, in the offices of the Romanian Post Office, in the Inmedio and Germanos stores, as well as at the Radio Hall Box Office

The access to the Cerchez Hall will be granted from the main entrance of the Cotroceni National Museum, situated vis-a-vis the Botanical Garden.