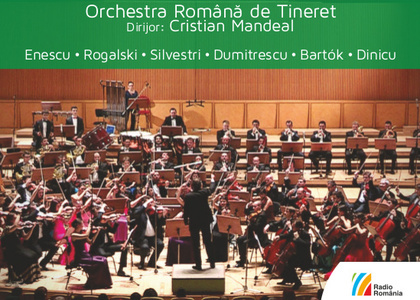 As Mrs. Oltea Şerban-Pârâu emphasized during her presentation of the record album, by means of these recordings - made by Radio Romania in 2012 - 'the conductor Cristian Mandeal can see how his insisting on the detail as a part of a whole resonant with honor and distinction pays off. (...) In six years the Romanian Youth Orchestra has become not only a place where the most talented and young musicians get together but also a place where the artistic excellency embodies the main motivational engine of all the musicians.'

The permanent conductor of the Romanian Youth Orchestra, Cristian Mandeal worked together with well-thought-of orchestras from all over the world, with distinct soloists and youth orchestras (he taught summer and artistry classes). He was the Artistic Director of the George Enescu' International Festival and Competition in 2001 and 2003. He recorded many opera, symphonic and film songs on LP and compact CD's. Since 2005 Cristian Mandeal has been the principal invited conductor of the Hallé Orchestra in Manchester.

'The Romanian Youth Orchestra - 'the Enescian spirit and the European tradition', a project master-minded by Marian Cazacu - where the best musicians in the world are selected to perform - started in 2008 in Sinaia for the benefit of entire generation of the Romanian musiciens, to connect them to the European artistic requirements and aspirations. By virtue of its founder, the cello player Marin Cazacu and of the permanent conductor Cristian Mandeal, the Romanian Youth Orchestra has become in a couple of years an exceptional orchestra and since 2011 it has been a part of the European Federation of National Youth Orchestras (EFNYO). During its last international performance in June 2014, the Orchestra jubilated on the stage of the Berlin Philharmonic in the 'Young Euro Classic' Festival.