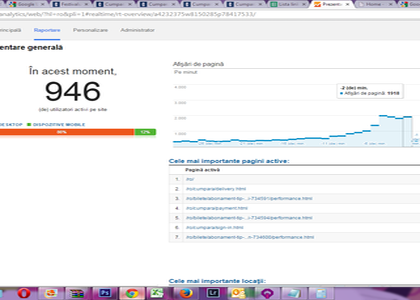 Record Sales of the Season Tickets for the 2015 'George Enescu' International Festival: They were Sold out in the First Ten Minutes

Thursday, 15 January 2015 , ora 9.24
The season tickets for the 2015 edition of the 'George Enescu' International Festival (30th August - 20th September, Bucharest), which were put up for sale on Thursday morning at 10:00 o'clock, through the Eventim network, were sold out in ten seconds - for the concerts at the Romanian Athenaeum, respectively ten minutes - for the concerts at the Palace Hall.

The sale procedure of the season tickets for the 2015 'George Enescu' International Festival started on Thursday, 15th January, at 10:00, through the Eventim network. Before the beginning of the sale, on the www.eventim.ro website there were almost 1.000 users logged in.

ʽStatistically, an order placed on the Eventim site comprises an average of 2,8 tickets; with 1000 users logged in at the moment of the beginning of the sale, 2.800 tickets could have been sold to these users in the first seconds. With respect to the number of available season tickets, this number is almost its double, and we are only taking into consideration the first seconds. On the whole, roughly, from the traffic registered on the Evetim site, the request was ten times higher than the offer', Valentin Vasiloiu, the director of Eventim, stated to the press.

The Programme of the 2015 'George Enescu' International Festival is available at this link.

Detailed information about the season tickets types, the ticket types and the plan of the hall is available on this link.

The record sale of the tickets confirms the growing tendency of the public's interest for the 'George Enescu' International Festival. For the 2013 edition the season tickets were also sold out in less than a hour.

The 2015 edition will take place between 30th August and 20th September, at the Palace Hall and the Romanian Athenaeum in Bucharest and will hold for 22 days, 58 concerts in the halls, as well as many other open-air events, in the ʽFestival's Square', which will stretch between 3rd and 20th September and within ʽCreative Bucharest'.

The twenty-second edition of the Festival brings in premiere to Bucharest, after 15 years of negotiation, the Orchestra of the Berlin Philharmonic, which will perform on the stage of the Palace Hall on 3rd September 2015, under the baton of the legendary Sir Simon Rattle. The Orchestra of the Berlin Philharmonic has been designated by the prestigious Gramophone British magazine to be one of the top ten best European orchestras (2006) and was voted to be the second best orchestra in the world (2008), after the Concertgebouw Orchestra in Amsterdam - which will also perform within the 2015 'George Enescu' International Festival, on 19th and 20th September. A famous American orchestra will also be present in premiere at the Festival - the San Francisco Symphony - and will also interpret a work by George Enescu.

The famous violinists Anne Sophie Mutter, Janine Jansen and David Garrett, the Israeli conductor Zubin Mehta, as well as the Romanian conductor Ion Marin and the pianist João Pires are among the famous guests of this edition. At the Festival there will also be winners of the ʽGeorge Enescu' Competition: Alexandru Tomescu, Valery Sokolov, Ştefan Tarara, Vlad Stănculeasa, together with Agnes Baltsa and the pianist Elisabeta Leonskaja.

The public will be able to listen to 20 works by George Enescu in the modern interpretations of some of the most important orchestras in the world. This way, the Festival continues the line of making Enescu's repertoire known world-wide.

Details about the Festival for the press: