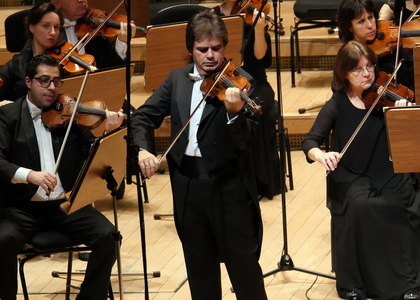 Vivaldi's 'Four Seasons' with GABRIEL CROITORU at the Radio Hall!

The musical evening at the Radio Hall will start with the famous suite THE FOUR SEASONS, composed by VIVALDI in 1720 and which became truly appreciated and well-known as late as the 20th century. The motif of the seasons has inspired a lot of composers across time, from Haydn and Tchaikovsky to - closer to the contemporary period - Astor Piazzolla, but none of the scores signed by the other artists has generated as many interpretations as Vivaldi's creation. The Four Seasons are characterized by an original and extremely evocative sonority; it is a work that practically makes the listener 'see' the different moments of the year in front of his eyes.

You will have the chance of listening to this score being interpreted by the violinist GABRIEL CROITORU, soloist of the Radio Orchestras and Choirs. He has the right to use the Guarneri violin which belonged to George Enescu; this instrument is part of the world patrimony and is under the care of the 'George Enescu' National Museum. With more than a thousand stage performances, the violinist Gabriel Croitoru is a musician with a strong presence in the universe of music. As a soloist, he played together with important world orchestras, such as: the London Royal Philharmonic, the Queen Sofía Chamber Orchestra, the symphony orchestras in Monte Carlo, Thessaloniki, Malaga, Seville, Galicia, Pamplona, Cannes, Lyon, etc. His recitals were applauded in France, Spain, Germany, Belgium, the Netherlands, Italy, China, the USA. Starting with 2011, he has performed in several important national tours under the title 'The Duel of the Violins' (together with Liviu Prunaru and Horia Mihail), and 'George Enescu's Violin Travelling to Rural Areas' (beside Horia Mihail).

In the second part of the evening you will listen to the last of the 41 symphonies composed by the brilliant MOZART in only 35 years of life: Symphony No. 41 in C Major, also called Jupiter because of its triumphal air and its grand sonority.

The concert is conducted by CRISTIAN BRÂNCUŞI, founding member of the Radio Chamber Orchestra and chief conductor. Since 1990, the artist has conducted the orchestra in hundreds of concerts with a diverse repertory, from pre-classical works to contemporary creations.

The concert can be listened to live on all Radio Romania Culture and Radio Romania Music frequencies in the country and live streaming on the Internet on www.radiorormaniacultural.ro şi www.romania-muzical.ro.

For any other info related to the National Radio Orchestras and Choirs please visit www.orchestreradio.ro or www.orchestreradio.com. The Radio Hall can be reached by public transportation: trams 24 and 44 - the stop 'Radio Romania' - Virgiliu Square (the intersection of Berzei Street and Ştirbei Vodă, close to Berthelot Street) or means of transport that have stops close by, on Mircea Vulcănescu Street, Berzei Street, Ştirbei Vodă, Bdul. Eroilor, Calea Plevnei, Bdul. Dinicu Golescu - buses nos. 133, 178, 126, 168, 226, 368, etc.