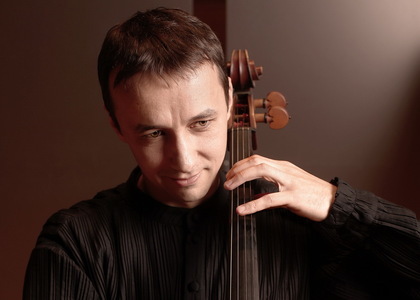 Do You Like Răzvan Suma? Răzvan Suma Performs Fauré, Tchaikovsky and Dvořák Accompanied by the National Radio Orchestra

Monday, 2 February 2015 , ora 14.49
The first concert of February supported by the National Radio Orchestra, on Friday, 6th February 2015, at 19:00, is an occasion to applaud RĂZVAN SUMA, soloist of the Radio Orchestras and Choirs and one of the most appreciated Romanian cellists, known to the public nationwide thanks to the national tours Vă place BACH? (Do you like Bach?), Vă place BRAHMS? (Do you like Brahms?) and Vă place tango? (Do you like Tango?). The artist will perform three scores signed by great composers of the symphonic repertory: Élégie - Fauré, Pezzo Capriccioso - Tchaikovsky and Rondo - Dvořák.

The varied programme, which you will enjoy at the Radio Hall, will be presented by the National Radio Orchestra, under the baton of MIRCEA HOLIARTOC, who will make his debut on this occasion, accompanied by the ensemble from Bucharest. The Romanian Radio Orchestras and Choirs are helping the young Romanian artists, supporting the promotion of the valuable musicians on the Radio Hall's stage. Mircea Holiartoc is a conductor of the "Nae Leonard" Musical Theatre in Galați. He collaborates with several specialized institutions in Craiova, Timișoara, Târgoviște, Bacău, Chișinău, Iași, Brașov and Pitești and was distinguished with numerous awards at national competitions. His repertoire includes numerous titles of symphonic works, as well as opera among which we mention: The Barber of Seville - Rossini, Don Giovanni, The Marriage of Figaro - Mozart, Carmen - Bizet, Cavalleria Rusticana - Mascagni and so on.

RĂZVAN SUMA is one of the most active young Romanian musicians, with a vast repertoire, made in hundreds of recitals and concerts held all around the world. In August 2014, Răzvan Suma was invited for the second time to the Murten Classics Festival (Switzerland), in November he held a successful and ample tour in Argentina, and on 1st December, 2014, he performed in Lisbon, at the invitation of the Romanian Cultural Institute.

Under the title Vă place BACH? (Do you like Bach?), in 2012 Răzvan Suma held his first solo national tour, the event representing an absolute premiere in Romania in the field of classical music: the first performance of a Romanian artist, in one concert, of the complete cello suites by Bach. In 2013, Răzvan Suma suggested to the music lovers the national tour Do you like Bach?, accompanied by the Spanish pianist Josu Okiñena. In October 2014, he was appreciated nationwide for his national tour VĂ PLACE TANGO? (Do you like Tango?), held alongside his wife, Analia Selis and the Argentinian guitarist and composer Julio Santillan.

Beside his constant presence in the area of classical music, Răzvan Suma participated in projects less conventional, addressed to a young public, opened to innovation. The most recent example on this line is the collaboration with the Vița de Vie band (2013), one of the songs on the album Acustic (Acoustic) was recorded along with Răzvan Suma.

Beside the three scores performed by Răzvan Suma with the National Radio Orchestra, you will also hear in the evening's programme the overture of the Béatrice et Bénédict comical opera, the musical version adapted by Berlioz after Shakespeare's play Much Ado About Nothing and Tchaikovsky's Symphony No. IV.

This was dedicated by the great Russian composer to Nadezhda von Meck, Tchaikovsky's protector and huge admirer, who played the role of the patron of art in the artist's life. The work reflects the composer's spiritual searching, he himself confessing about his score's theme: "The introduction contains the core of the entire work, his main idea. It is that fatum, that fatal force which prevents the enthusiasm of the happiness' fulfilment, baffling with force for the wellness and peace to be completely achievable. The clouds stay above us as Damocles' sword, always poisoning us and our soul without forgiveness. The fatum is invincible, nobody can control it. The only thing you can do is to resign yourself in an escapeless sadness. (...)"

The concert can be listened to live on all Radio Romania Culture and Radio Romania Music frequencies in the country and live on the Internet on www.radioromaniacultural.ro and www.romania-muzical.ro.

For any other information related to the National Radio Orchestras and Choirs please visit www.orchestreradio.ro or www.orchestreradio.com. The Radio Hall can be reached by public transportation: trams nos. 24 and 44 to the stop "Radio Romania" - Virgiliu Square (the intersection of Berzei Street and Știrbei Vodă, close to Berthelot Street). You can also choose means of transport that have stops close by, on Mircea Vulcănescu Street, Berzei Street, Știrbei Vodă, Bdul. Eroilor, Calea Plevnei, Bdul. Dinicu Golescu - buses nos. 133, 178, 126, 168, 226, 368, etc.