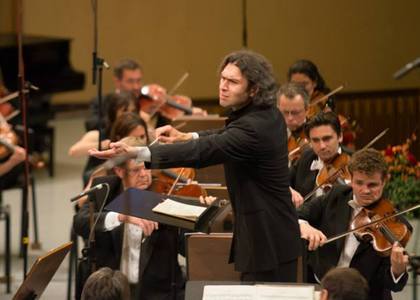 George Enescu's 'Symphony No. 3' - the London Premiere after its Interpretation at the 2013 Edition of the 'George Enescu' International Festival

2015 marks an amazing premiere: on Saturday, 7th February, 2015, one of the most important works of the composer George Enescu, Symphony No. 3 in C Major, with Chorus, Opus 21, will be interpreted by the prestigious London Philharmonic Orchestra on a London stage, in the Royal Festival Hall of the Southbank Center , right on the banks of the Thames.

At the end of this week, Symphony No. 3 by George Enescu will be interpreted in London, for the first time, under the baton of one of the highest-rated composer of the hour, Vladimir Jurowski. On Saturday, 07th February, 2015, at 19:30 (London time), he will conduct the prestigious London Philharmonic Orchestra, whose principal conductor he is, on the stage of the Royal Festival Hall, within the famous British arts centre Southbank Centre.

The first time that Enescu's work was presented under this interpretation was on the stage of the Palace Hall in Bucharest, within the 2013 edition of the 'George Enescu' International Festival. It was then when conductor Vladimir Jurowski decided to include this creation of the Romanian composer in the international repertory of the orchestra.

On the Southbank Centre website, Symphony No. 3 'of the Romanian composer George Enescu' is depicted as 'a work full of emotional intensity, a brooding, heroic and triumphant creation.'

'My attachment towards George Enescu's music has grown in direct proportion to the attachment towards the Enescu Festival, ever since its first edition, when I was a guest, nine years ago', conductor Vladimir Jurowski declared in an interview granted to the journalist Marius Constantinescu, in September last year.

20 works by George Enescu will be interpreted during the 2015 edition of the Enescu Festival (30th August - 20th September). Among the interpretations, a special mention deserve the prestigious San Francisco Symphony Orchestra (Pulitzer Prize for music), the Israel Philharmonic Orchestra under the baton of the legendary Zubin Mehta, or that of the German violinist David Garret - Ballad for Violin and Orchestra, composed by George Enescu in 1895.

The only Romanian composer who became part of the universal patrimony, George Enescu was a violinist, professor, conductor and composer. Highly rated at international level, George Enescu was to make his debut as a composer in 1898, when one of his works was interpreted by the Colonne Orchestra in Paris. He was present on some of the most important stages of the world, including his conducting at the famous Carnegie Hall in New York. George Enescu was the professor and mentor of one of the most well-known violinists of the previous century, Yehudi Menuhin. Their bond was so strong that, after Enescu's death, Yehudi Menuhin accepted the invitation to come to Romania in September 1995, in order to open the 'George Enescu' International Festival. At the time, the Palace Hall was not a space fit for concerts, so a special hall was prepared inside Casa Poporului: 'I took Lord Menuhin's arm and we walked almost a kilometer through the catacombs of the Parliament in order to get to the other side of the hall, where a workers' canteen was situated', Mihai Constantinescu remembers. Three years later, in 1998, Yehudi Menuhin accepted to become the Honorary President of the George Enescu Festival, although at the time his agenda was already full until 2003.

Along his career, Vladimir Jurowski has collaborated with some of the most important music institutions in the world, e.g. the prestigious Royal Opera House Covent Garden, Teatro La Fenice di Venezia or L`Opéra Bastille in Paris. In 1999 he made his debut at the Metropolitan Opera House in New York. Starting with 2007, Vladimir Jurowski has become the principal conductor of the London Philharmonic Orchestra, one of the best-rated British orchestras at the moment. 'Under Jurowski, this orchestra has become a fabulously refined instrument', said the British daily paper 'The Telegraph'.

Southbank Centre is considered to be one of the most vibrant arts centers in London and in the world and is, at the same time, the headquarters of the London Philharmonic Orchestra.