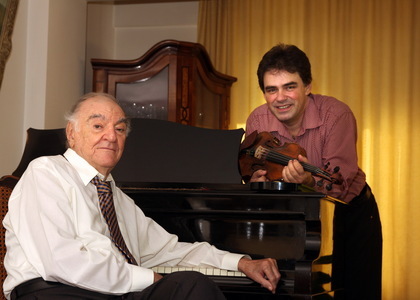 Valentin Gheorghiu and Gabriel Croitoru: the Complete Series of Beethoven's 'Piano and Violin Sonatas', the 2nd part, at the Romanian Radio Hall

Thursday, 29 January 2015 , ora 9.24
Two of the greatest Romanian musicians - pianist Valentin Gheorghiu and violinist Gabriel Croitoru - fixed an appointment with… Beethoven, in an extraordinary recital, on the stage of the Romanian Radio Hall!

Two precious musical instruments will keep company to the maestros who will bring them to life: the new Steinway piano belonging to the Romanian Radio Hall and the Guarneri violin, which once belonged to George Enescu and which is now under the administration of the George Enescu National Museum - it has been used by violinist Gabriel Croitoru since 2008, when he won the possibility to play on it.

The artistic bond between the two musicians is built around a beautiful story about fate in the world of music: Gabriel Croitorul is a brilliant pupil of the great violinist Ștefan Gheorghiu (the pianist's brother).

Valentin Gheorghiu made himself remarked as an exceptional Romanian pianist and composer, by collaborating with important names in the music life, accompanied by whom he performed in Austria, France, Germany, USA, Switzerland, Italy, Great Britain, Sweden, Norway, Canada, Spain, Japan, etc. In addition to an exceptional soloistic activity, marked by recitals and concerts, Valentin Gheorghiu dedicates himself to the interpretation of chamber music as well. He has recorded countless of albums, many of which were edited by recording labels from his country and from abroad.

Gabriel Croitoru, who is a soloist of the Romanian Radio Orchestras and Choirs, has over a thousand of stage appearances. He performed as a soloist alongside important world orchestras, such as: London Royal Philharmonic, the Queen Sofía Chamber Orchestra, the symphonic orchestras of Monte Carlo, Thessalonica, Málaga, Seville, Cannes, Lyon, etc. He was applauded during the recitals he performed in in France, Spain, Germany, Holland, Italy, China and the USA. Starting with 2011, he performed in several important national tours, which he named 'The Duel of Violins' (alongside Liviu Prunaru and Horia Mihail) and 'Enescu's Violin in the Villages' (alongside Horia Mihail).

On 22nd January, 2015, Gabriel Croitoru was applauded alongside violinist Liviu Prunaru and pianist Horia Mihail at the end of an extraordinary recital, which took place in London, as part of the ample series of events dedicated to George Enescu, as a commemoration of sixteen years since the death of the composers, events which were organized by the Romanian Cultural Institute in London.

The concert can be listened live on all frequencies of Radio Romania Culture and Radio Romania Music and in streaming live on the Internet on www.radiorormaniacultural.ro and www.romania-muzical.ro.

Tickets are available online on www.bilete.ro, or you may purchase tickets at all offices of the Romanian Post Company, in the Inmedio Shops bearing the Bilete.ro logo, in the Germanos Shops and at the Romanian Radio Hall Box Office.