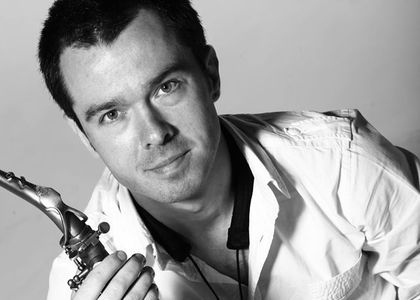 From Holland to Bucharest: Saxophonist Cătălin Milea alongside the Radio Big Band!

Thursday, 12 February 2015 , ora 9.21
In February, the RADIO BIG BAND will resume its shows at the Radio Hall, shows in the 'ROMANIAN JAZZ' series, events conducted by IONEL TUDOR and chaired by FLORIAN LUNGU which are truly successful, especially among the young audience that loves the genre.

On 19th Thursday (at 19:00), the 2015 season's first event of this sort will be a special one, thanks to the night's guest. Established in Holland, saxophonist CĂTĂLIN MILEA - one of the most active and appreciated jazz musicians of his generation, an artist applauded both for his interpreting and composing aspects - will perform at the Radio Hall, on a concert where soloistic moments will be mixed with orchestra ones, marked by improvisation, composition and personal arrangements. Considered to be one of the most creative Romanian jazz musicians, Cătălin Milea will present on the stage of the Radio Hall - for the first time in Romania - works such as Perpetuum, Sarmis, Valse for Sophie, Snow Trails, My Cousin Dracula, Notes for Oatts and more, all belonging to the artist.

Between 2008 and 2010, Cătălin Milea received the Hyugens Beurs scholarship from the Dutch government and, supported by a private trust company, recorded the Re-Bop Unit featuring Dick Oatts album, featuring one of the most appreciated musicians of the genre from New York, as well as the Something for Now album, recorded alongside RAM (Rodriguez/Aksunger/Milea), the trio of improvised music. Owner of various international awards, the Romanian artist began his professional studies at the National University of Music Bucharest, but carried them on in Holland, at the Prins Claus Conservatoire and at the Hague Royal Conservatory.

The saxophonist recorded songs and performed with several artists/ensembles: as a guest, he performed alongside the European Youth Big-Band (led by Peter Herbolzheimer), the European Contemporary Orchestra (ECO), Camerata Ardesko; as a leader, with the Synaesthetik trio, the Confluence Quartet, the Re-Bop Unit, the Cătălin Milea Hammond Trip.

Cătălin Milea is also very active on the educational stage, offering workshops and mastery classes. He is also the editor of the first Romanian jazz magazine, Jazz Compas.

Tickets are available on www.bilete.ro, at Romanian Post offices, at 'Bilete.ro'-marked Inmedio Shops, at Germanos Shops and at the Radio Hall's box office.

For further Orchestra and Radio Choir-related information, please visit www.orchestraradio.ro or www.orchestraradio.com; via means of public transportation, the Radio Hall can be reached by taking trams Nos. 22 and 44 to the 'Radio România' stop - Virgiliu Market (Berzei Str. at the crossroads with Știrbei Vodă, close to Berthelot Str.). You may also choose nearby means of transportation - Mircea Vulcănescu Str., Știrbei Vodă Str., Eroilor Bvd., Calea Plevnei, Dinicul Golescu Bvd. - buses 133, 178, 126, 168, 226, 368 and so on.