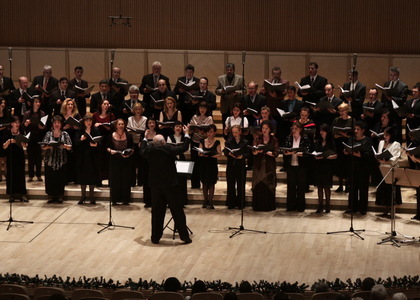 The first a cappella concert of the year, which is dedicated to this anniversary, has a programme which contains music taken from the universal repertoire and the most beautiful scores intended for mixed choirs. The event is scheduled to take place on Wednesday, 18th February (starting at 19:00). You will watch the performance of works by Mendelssohn, Schumann, Tchaikovsky, Schubert, Rachmaninoff and Bernstein. The repertorial concept of the concert belongs to Dan Mihai Goia, who has been the conductor of the Academic Radio Choir for the last fifteen years.

"Now, on this anniversary hour, I feel a great deal of happiness and excitement! I thank the Good Lord that he offered me the great chance to conduct the Academic Radio Choir, which is an elite professional collective, consisting of passionate and devoted to the sound art musicians, at the end of my professional career. They continue to walk on a road scattered with hard work, but also valuable artistic accomplishments, which have gladdened deeply the mind and soul of the music lovers everywhere, with perseverance, passion and intransigence", said conductor Dan Mihai Goia
The filled-with-universal-music evening is unfolding with the participation of the pianist Carmen Săndulescu, soprano Svetlana Sîcencova and organist Simona Săndulescu. The event is presented by Liliana Staicu, the manager of the Radio Romania Music radio station.

Founded to interpret the vocal-symphonic repertoire, the Academic Radio Choir - which comprises 55 members today - interprets, during the concerts it holds, numerous masterpieces of the vocal-symphonic music - oratorios, cantatas, madrigals, poems, ballads and a cappella works, belonging to the Romanian and universal repertoire.

Founded in 1940, under the administration of conductor and composer Ioan Croitoru, the Academic Radio Choir has imposed itself as an elite ensemble and it has been conducted by Dumitru D. Botez, Gheorghe Danga, Dumitru D.Stancu, Constantin Petrovici, Emanuel Elenescu, Alexandru Şumski, Carol Litvin, Aurel Grigoraş and Dan Mihai Goia over the years. The Academic Radio Choir has gone on tours in Germany, Bulgaria, Spain, Greece, Cyprus and Israel and collaborated with reputed orchestras, which performed under prestigious batons from here and abroad.

Concomitantly with preparing the music programmes for each season, the Academic Radio Choir records the music background for the Radio Romania programmes, while promoting important values of the Romanian traditional and contemporary creations, including the first auditions, many of them being dedicated to the ensemble.

Tickets are available on www.bilete.ro, at all offices of the Romanian Post Company, in the Inmedio stores bearing the Bilete.ro logo, in the Germanos stores as well as at the Romanian Radio Hall Box Office.