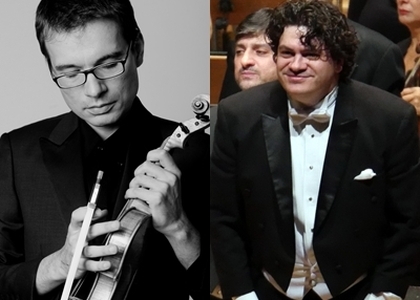 An ʻIncendiaryʼ Juxtaposition: Mozart versus Salieri and Cristian Măcelaru together with Alexandru Tomescu on the Stage of the RADIO HALL

Monday, 2 March 2015 , ora 9.48
Two composers whose artistic destiny is bonded through the conflicting relationship described (in a fictional form) in the famous ʻAmadeusʼ stage play (and also in the omonimous motion picture) - MOZART and SALIERI - and two valuable Romanian musicians - the conductor CRISTIAN MĂCELARU and the violinist ALEXANDRU TOMESCU - meet on the stage of the Radio Hall!

On Friday, 20th February 2015, at 19:00, together with the NATIONAL RADIO ORCHESTRA, you will acclaim CRISTIAN MĂCELARU, the associated conductor of the Philadelphia Philharmonic, with a beautiful career especially in the U.S.A and Canada and the violinist ALEXANDRU TOMESCU, the soloist of the Radio Orchestras and Choirs, who has the privilege to play the Stradivarius Elder-Voicu violin.

The repertoire of the evening is projected on the basis of the ʻincendiaryʼ juxtaposition between the Concerto for Violin and Orchestra No. 2 in D Major by MOZART and the Venetian Symphony signed by his contemporary, the Italian composer ANTONIO SALIERI; it is said that between the two artists there was an intense artistic rivalry. Salieri's creations entered a shadow cone until the twentieth century, when his fame was ʻrecreatedʼ by the ʻAmadeusʼ stage play, signed by the playwright Peter Shaffer that became widely known thanks to the screening of the director Miloš Forman.

You will also listen to one of the nine Beethovenian symphonies - Symphony No. 7 - conducted in absolute premiere in Vienna (8th December, 1813) by BEETHOVEN himself, the respective concert was a charity one for the soldiers wounded in the battle of Hanau. Although Beethoven considered this symphony to be one of the most successful of his works, the opinions of critics and musicians were varied.

With a fully ascending conducting activity, CRISTIAN MĂCELARU started his career together with the Philadelphia Orchestra, in the 2010-2011 season he was appointed conductor assistant of the same orchestra and he was distinguished with the Sir Georg Solti Emerging Conductor Award for special merits. He studied at the Rice University and obtained the master's degree for conducting. Since he also had a violinist formation, Cristian Măcelaru was the concert-maestro of the Miami Symphony Orchestra and he made his debut at the Carnegie Hall with the same orchestra. Cristian Măcelaru was invited to conduct the Chicago Symphony Orchestra to replace Pierre Boulez.

ALEXANDRU TOMESCU performed countless times both together with the Radio Chamber Orchestra and with the National Radio Orchestra, on the stage of the Radio Hall and abroad, in tours in Europe and Asia. Concerts by Mozart, Bruch or Mendelssohn among others, which were performed by Alexandru Tomescu together with the two ensembles, took shape in recordings released by the Radio Publishing House.

The Stradivarius Tour, build around the collection violin he plays, is an annual event which carried the young violinist throughout the country. He performed the Complete of the Repertoire for Solo Violin - the twenty-four Caprices by Niccolò Paganini, the Six Sonatas by Eugène Ysaÿe and The Six Violin Sonatas and Partitas by Johann Sebastian Bach - the tours were followed by a DVD or CD release, discographic products which enjoyed great success.

Equally passionate about chamber music, Alexandru Tomescu first performed in the Romanian Piano Trio (2005-2010) and starting with 2011 he is the prime violinist of the Ad Libitum Quartet, the prestigious chamber ensemble, with a history of over twenty-five years.

The concert can be listened to live on all the Radio Romania Culture and Radio Romania Music frequencies in the country and on live streaming on the internet on www.radiorormaniacultural.ro and www.romania-muzical.ro.

Tickets are available on www.bilete.ro, at the Romanian Post Offices, at the Inmedio Stores which carry the Bilete.ro tag, at the Germanos Stores and at the Box Office of the Radio Hall.

For further information related to the Radio Choirs and Orchestras please consult the sites www.orchestreradio.ro or www.orchestreradio.com. The access to the Radio Hall, by public transportation can be done with the 24 and 44 tram lines to the Radio Romania stop - Piaţa Virgiliu ( Berzei Street at the crossroad with Ştirbei Vodă, near the Berthelot street). You could also choose transportation means which arrive in the vicinity - Mircea Vulcănescu Street, Berzei Street, Ştirbei Vodă Street, Eroilor Boulevard, Plevnei Way, Dinicu Golescu Boulevard - buses no. 133, 178, 123, 168, 226, 368 and others.