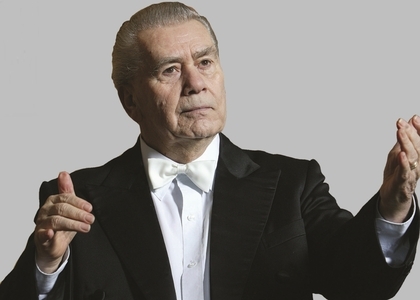 90 Years since the Birth of Maestro Marin Constantin

Friday, 27 February 2015 , ora 9.22
Today marks 90 years since the birth of musician Marin Constantin, also a conductor and a composer, as well as the founder of the 'Madrigal' National Chamber Choir. Starting from this date, a series of events dedicated to the memory of the great cultural personality will take place both in Bucharest and in the whole country and it will continue throughout the year.

On this occasion, the Minister of Culture, Mr. Ionuț Vulpescu, has signed decree nr. 2111, published in the The Official Journal no. 133 on 23rd February, 2015, through which the institution's name will also include its founder's name: the 'Madrigal-Marin Constantin' National Chamber Choir.

Among the actions that mark the 90 years that have passed since the birth of the founder of the Madrigal Choir there are the endeavours of the local authorities in Bucharest, for example, the square bearing the name of Marin Constantin, as well as those of the National University of Music Bucharest, that will give the same name to one of the halls of the new head office that is to be opened.

On the day in which the musician would have reached 90 years, the Recitation room of the Cantacuzino - Enescu Palace will host a round table, which will be attended by exceptional representatives from the fields of Romanian culture and musical criticism. The event is an opportunity for the alumni-members of the choir that was founded 52 years ago to meet. During the meeting, next to a micro-recital of the Madrigal Choir, close friends of Master Marin Constantin will hold speeches. Access to this event is granted via invitation.

On Sunday, in the Great Hall of the Romanian Athenaeum, starting at 19:00, the 'Madrigal-Marin Constantin' National Chamber Choir will perform the Extraordinary Concert entitled 'Marin Constantin 90', during which songs that secured the famous choir - now led by Anna Ungureanu - a place in history, will be performed. The event will be presented by musical critics Valentina Sandu Dediu and Viorel Cosma. The concert's soloists are Denis Maxim and Ana Mirescu, while Miruna Vidican will play the harp. Also, within the National Cantus Mundi Programme, next to the Madrigal Choir, the Radio Children Choir, led by Voicu Popescu and accompanied by Magdalena Faur on the piano, will perform a recital.

The Romanian Television schedule layout will include, during this weekend, a special programme dedicated to the 'Marin Constantin 90' series of events:

At the same time, the Romanian Radio Broadcasting Corporation will dedicate two important moments to the 90 years that have passed since the birth of Master Marin Constantin:

· Radio Romania Culture dedicates to this event its 27th February edition of the Oasis of Music show presented by Sorina Goia.

Composer and conductor, Marin Constantin laid the groundwork of the 'Madrigal' Choir in 1963, being a renowned specialist in Renaissance music, Gregorian and Baroque chants, as well as traditional and contemporary Romanian music. He dedicated himself to music, starting as a conductor of student and amateur choirs, such as the University Choir and the Bucharest Education Syndicate Choir (1949-1951). He was an assistant at the Faculty of Philosophy Bucharest (1948-1952), and starting in 1954 he led the musical department at the Central House of Popular Creation (1954-1955), he was director and conductor of the Romanian UTC Ensemble (1951-1974), assistant director of the Musical Direction of the Ministry of Culture (1960-1965), then a choir professor at the Conservatory (starting in 1960). Between 1966 and 1969 he was the director of the Romanian Opera.

Master Constantin Marin was a member of the Composers' Union (starting in 1956), being the author of several choral songs. He founded the Bucharest University Choir (1948), the 'Gheorghe Cucu' Choral Chapel (1958) and the 'Madrigal' National Chamber Choir (1963).

Beginning with 7th July, 1963, when the first concert took place, until the farewell event of 2010, he was the conductor of the 'Madrigal' Choir of the Bucharest Conservatory, an exceptional ensemble, that made a name for itself through numerous tours around the world. It held over 4000 concerts in Romania and worldwide, within prestigious festivals: George Enescu (Romania), Bordeaux (France), Vienna (Austria), Handel (Germany), UNICEF (France), the Warsaw Autumn (Poland), the Marcian Year (Venice, Italy), the Prague Spring (the Czech Republic), Musica Antiqua Europae Orientalis (Poland), Ohridsko Leto and Belef (Belgrade) and so forth.