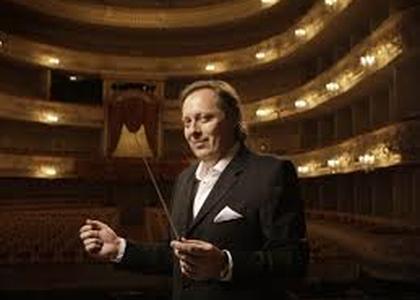 Peter Feranec - from the Mikhailovsky Theatre in Sankt Petersburg - at the Radio Hall!

Monday, 9 March 2015 , ora 14.15
The first foreign lead conductor in the history of the famous Bolshoi Theatre in Moscow, the Slovak musician Peter Feranec, will be the guest conductor of the National Radio Orchestra in Friday's concert, on 13th March, 2015, at 19.00 at the Radio Hall. The evening's programme is extremely appealing as well: Beethoven - Concerto in D major for violin and orchestra, one of the most famous violin scores, as well as Rachmaninoff's Symphony No. 2, which had its grand premiere under the baton of the composer himself at Sankt Petersburg in February 1908.

Up to this point, Peter Feranec's career consists in a series of important positions in prestigious institutions: he was the guest lead conductor of the Sankt Petersburg Philharmonic Orchestra, the chief conductor of the Slovak National Theatre in Bratislava, guest conductor at the Prague National Theatre in the Czech Republic, chief conductor and music director of the Mikhailovsky Theatre in Sankt Petersburg. After he made his entrance on the stage of the Bolshoi Theatre in Moscow with an exceptional performance of Mozart's The Marriage of Figaro, Peter Feranec was appointed as the successor of Alexander Lazarev, thus becoming the first foreign lead conductor in the history of the theatre.

The event at Sala Radio will also be an occasion for the audience to applaud the young violinist IOANA CRISTINA GOICEA for her Beethoven performance. In September 2013, when she was only 20 years old, she won the 1st place in the prestigious international competition Johannes Brahms (in Pörtschach, Austria). After the contest which was organised by the Deutsche Stiftung Musikleben Foundation in Hamburg in February 2013, the violinist won the right to play the Giambattista Guadagnini violin, which was made in Parma in 1761. In the present, the young musician is attending classes at the famous University of Music and Theatre Felix Mendelssohn Bartholdy in Leipzig.

Ioana Cristina Goica has already performed as a soloist with many orchestras: The George Enescu Philharmonic, The National Radio Orchestra and Radio Chamber Orchestra, The Youth National Orchestra, Lüneburger Bachorchester, Norddeutsche Philarmonie, I Virtuosi Italiani, Kunitachi Symphoniker, The Concertino ensemble etc., as well as all of the symphonic orchestras in Romania. Other prestigious halls where the audience appreciated her were Wiener Konzerthaus, Great Hall of the Latvian Music Academy (Riga), Hamburger Rathaus - Kaisersaal (Hamburg), and Kanematsu Auditorium (Tokyo). She was also invited to perform a recital on the stage of the well-known St-Martin-in-the-Fields ensemble in London in 2015.

The concert can be listened to live on all the Radio Romania Culture and Radio Romania Music frequencies in the country and on live streaming on the internet on www.radiorormaniacultural.ro and www.romania-muzical.ro.

Tickets are available on www.bilete.ro, at the Romanian Post Offices, at the Inmedio Stores which carry the Bilete.ro tag, at the Germanos Stores and at the Box Office of the Radio Hall.

For further information related to the Radio Choirs and Orchestras please consult the sites www.orchestreradio.ro or www.orchestreradio.com. The access to the Radio Hall, by public transportation can be done with the 24 and 44 tram lines to the Radio Romania stop - Piaţa Virgiliu ( Berzei Street at the crossroad with Ştirbei Vodă, near the Berthelot street). You could also choose transportation means which arrive in the vicinity - Mircea Vulcănescu Street, Berzei Street, Ştirbei Vodă Street, Eroilor Boulevard, Plevnei Way, Dinicu Golescu Boulevard - buses no. 133, 178, 123, 168, 226, 368 and others.