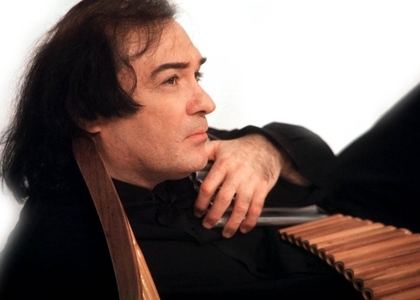 Two Pan - Flute Concertos on the Stage of the Romanian Radio Hall!

Wednesday, 18 March 2015 , ora 9.12
At the end of March, the Radio Chamber Orchestra addresses the public an invitation to an inedited musical evening: two concertos which belong to the Baroque Period, one of them written by Vivaldi - the famous composer of theFour Seasons - and the second belonging to Handel, will be interpreted in a pan-flute rendition!

On Wednesday, 25th March (starting at 19:00), at the Romanian Radio Hall, you will applaud the pan-flutist Cornel Pană, accompanied by the Radio Chamber Orchestra and you will listen to the Concerto for Flute/Pan-flute and Orchestra in F major, by Handel and the Concerto for Flute/Pan-flute and Orchestra in G major, by Vivaldi. The second concerto was named La Tempesta di Mare (Storm on the Sea) by the composer, because it renders in music, the torment of the sea waves and the wind, and the castaways' fight against the storm.

Soloist concertist and professor, pan-flutist Cornel Pană returns to the stage of the Romanian Radio Hall, after a quite long absence, which has been determined by his moving to Switzerland. Very appreciated in his adoptive country, he is a constant presence on the stages of the entire Europe, either as a member of the chamber music ensembles, or as a guest soloist concertist of symphonic orchestras. He has evolved alongside orchestras from his homeland or from abroad: the Radio Chamber Orcehstra, the Radio Folk Music Orchestra, the "George Enescu" Philharmonic Orchestra, Brașov, Sibiu and Târgu Mureș Philharmonic Orchestras etc., but also alongside the L'Ensemble Instrumental De Paris, or the University of Southern Mississippi Symphony Orchestra in Tennessee (the U.S.A.). He has been applauded during the concerts which he performed in several countries, on several continents: Italy, Austria, France, Switzerland, Germany, the U.S.A., Morocco, Ireland, the Great Britain, Belgium, Canada, and Japan, etc. Between 1991 and 2005 he recorded nineteen albums in Romania, France, Ireland, Germany and the U.S.A.

The performance takes place under the baton of Cristian Brâncuși, who is a member of the Radio Chamber Orchestra and its leading conductor. Since 1990, the artist has performed in hundreds of concerts which have had a varied repertoire from pre-Classical to contemporary compositions, accompanied by this ensemble.

During the evening's programme, you will also listen to the performance of the Symphony No.1 in D major, Hob.I:1, by Joseph Haydn and the Missa Sancti Amandi, by Johann Michael Hayn, who was Joseph Haydn's brother and his work is a festive liturgy, which is interpreted for the first time in front of the Romanian audience, with the participation the Academic Radio Choir, conducted by Dan Mihai Goia. Although Johann Michael Haydn was seen by his contemporaries as Joseph Haydn's equal, his brother's celebrity had shaded his reputation, and the rediscovery of his music took to a better appreciation of his works, beyond his brother's creations.

The concert can be listened to live on all Radio Romania Culture and Radio Romania Music frequencies in the country and live streaming on the Internet on www.radiorormaniacultural.ro and www.romania-muzical.ro.

The tickets are available on www.bilete.ro, at the Post Offices, in the Inmedio stores signpostedBilete.ro, in the Germanos stores and at the ticket office of the Romanian Radio Hall.