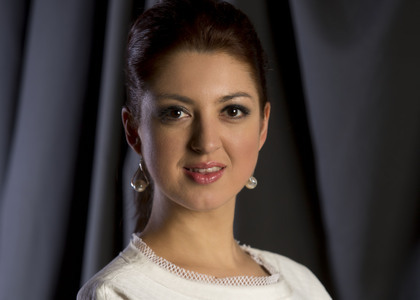 Pianist Alexandra Dariescu, the Youngest Romanian Musician, to whom the Royal House of Romania offers the 'Custodian of the Romanian Crown' Medal

Tuesday, 24 March 2015 , ora 9.04
Today, on 24th March, 2015, pianist Alexandra Dariescu will receive the "Custodian Romanian Crown" Medal, a distinction, given by the Royal House of Romania. The royal ceremony of decoration will take place at Peleș Castle, on 25th March.

The artist is also the youngest Romanian musician to whom the Romanian Royal Family will offer this distinction.

This year, Alexandra Dariescu will be celebrating 20 years of pianistic career, will launch the first album recorded with the Royal Philharmonic Orchestra, and in autumn will be back in Romania to perform a concert within the 'George Enescu' International Festival.

Distinguished with the Golden Medal by the Royal Northern College of Music in Manchester, Alexandra Dariescu is the first Romanian pianist who performed a concert at Albert Royal Hall, along with the Royal Philharmonic Orchestra based in London in the presence of the Romanian Royal Family.

Among the numerous awards and distinctions offered to Alexandra Dariescu, there is also the Award for Excellency in promoting the image of our country in Great Britain, offered by the Romanian Ambassador in London.