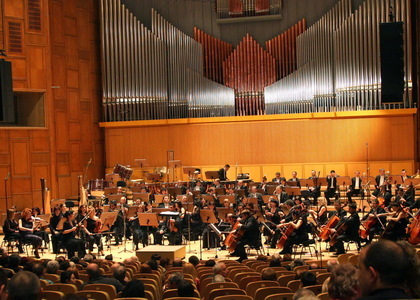 On Friday, 3rd April, at 19:00, the National Radio Orchestra is hosting a concert with two outstanding guests: the event will be conducted by the French master, Julien Salemkour, who was between 2000 and 2012 the assistant of the famous Daniel Barenboim for the Berlin State Opera, whilst on the piano you will applaud the Romanian artist Mirabela Dina. With a spectacular international career, she won the 1st Prize at the 'Martha Argerich International Piano Competition' in Buenos Aires 1990, a competition named in honour of the famous Argentinian pianist, with whom Mirabela Dina had the chance to perform on stage and record an album.

The concert to be hosted at Radio Hall consists of three works of the two big 'titans' of the German symphonic repertoire: Beethoven and Brahms. In the first part of the evening you will enjoy Beethoven's compositions - Grand Fugue and the Symphony no. 7, his second last work of this kind. Commenced in the summer of 1812 and finished in just four months, the Symphony no. 7 had its premiere in Vienna two years later (1814) with Beethoven himself conducting the piece. In the second part of the event you will listen to the Piano Concerto No. 2 by Johannes Brahms, which had its premiere in Budapest in 1881, with Brahms as a soloist, and was an immediate success.

As a former conducting assistant for the Berlin State Opera, Julien Salemkour conducted over 200 opera and ballet shows and symphonic music concerts. Over time he was a guest-conductor for prestigious institutions such as the Metropolitan Opera - New York, Teatro alla Scala - Milan, Semperoper - Dresden , Staatskapelle - Berlin and Berlin Radio Symphony Orchestra. In 2006, Julien Salemkour was asked at the last minute to take over a concert which was at first scheduled to be conducted by Daniel Barenboim, this concert celebrated Mozart's 250th Anniversary. Julien Salemkour was both the conductor and the pianist of the concert. The concert was broadcast live in 23 countries around the globe.

After winning many prizes at international competitions, the pianist Mirabela Dina started to perform on international stages in 1990 such as Great Britain, Italy, France, Germany and the U.S.A. The year 1998 was marked by a double-debut: Berlin at the Berliner Philharmonie (Berlin Philharmonic) - together with the Duetsche Symphonie Orchestra- and then at Konzerthaus am Gendarmenmarkt, where Mirabela Dina performed the Piano Concerto No. 2 by Brahms. After winning the 1st Prize at the 'Marta Argerich International Piano Competition' in Buenos Aires (1990), she was invited to play in Montréal, which was followed by recitals in Herkulessaal - München, Beethovenhaus - Bonn, Tonhalle - Zürich, performances at the piano festivals in La Roque d`Anthéron (France), Klavierfestival Ruhr (Germany), Musica Vitae - Växjö (Sweden), Torino Settembre Musica (Italy), etc.

In 2003, at the Lugano festival in Switzerland, she performed together with Martha Argerich (in the final concert) The Nutcracker Suite, the version for two pianos (recently released on CD by EMI under the name 'Martha Argerich and Friends'). In February 2007, Mirabela Dina was invited to perform at Salle Pleyel, in Paris, during weekend dedicated to Bach, where she performed, together with Martha Argerich, Gabriela Montero, Mauricio Vallina, Gidon Kremer and Kremerata Baltica, the Concerto for 4 Pianos and Orchestra by Bach amongst various other pieces.

The concert can be listened to live on all Radio Romania Culture and Radio Romania Music frequencies in the country and live streaming on the Internet on
www.radiorormaniacultural.ro and www.romania-muzical.ro.

The tickets are available on www.bilete.ro, at the Romanian Post Offices, in the Inmedio stores signposted 'Bilete.ro', in the Germanos stores and at the Romanian Radio Hall's ticket office.