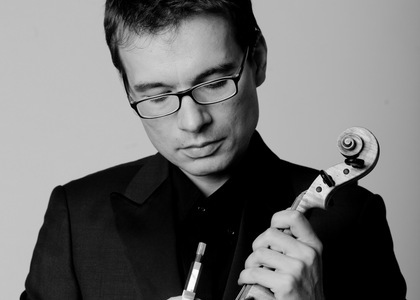 Alexandru Tomescu at the Radio Hall, with Music by Philip Glass

Wednesday, 1 April 2015 , ora 8.58
The concert held by the Radio Chamber Orchestra on Wednesday, 8th April 2015, starting at 19.00, puts forward three special meetings: the violinist ALEXANDRU TOMESCU will perform a creation of the controversial American composer PHILIP GLASS, the voice of the actor MIRCEA ALBULESCU will ʻplay' the role of the narator in the work The Milestone by FELICIA DONCEANU and the evening will be concluded with HAYDN's composition - The Seven Last Words of Our Savious on the Cross, broadcast before Easter .

The event at the Radio Hall will take place under the baton of the conductor ALEXANDRU GANEA, who has collaborated with the philharmonic orchestras in Sibiu, Braşov, Târgu Mureş, Craiova, Ploieşti, Chişinău, Târgovişte, Piteşti and other towns and has also been present at the music rack of the Radio Chamber Orchestra, the National Chamber Orchestra of the Moldavian Republic and others .

The concerto The American Four Seasons is a work which the contemporary American conductor Philip Glass - whose records have received three nominations at the Oscar awards - has created as an ʻanswer' to Vivaldi's famous part. The world premiere took place in Toronto in 2009, with the Toronto Symphony Orchestra, with the violinist Robert McDuffie as a soloist and he was the artist for whom the concerto was composed. The novelty is the fact that Philip Glass decided not to name the parts of his composition, so that he virtually gives the listener the freedom to imagine and choose which fragment corresponds to which season. At the Radio Hall you will listen to The American Four Seasons (together with the Radio Chamber Orchestra). Alexandru Tomescu, one of the most well known Romanian violinists, is the soloist of the Radio Choirs and Orchestras and plays the Elder-Voicu Stradivarius violin.

The work of FELICIA DONCEANU, a multidisciplinary artist (painter, sculptor, composer), entitled The Milestone - a ballad for narrator and string orchestra - will bring on the stage of the Radio Hall the great actor MIRCEA ALBULESCU, as the storyteller, through the recording of his voice,.

HAYDN's part - The Seven Last Words of Our Savious on the Cross - was ordered in 1783 on the occasion of the Good Friday, by the cathedral in Cadiz (Spain). It is a ʻpreamble' to the Easter celebration and it will conclude the evening offered by the Radio Chamber Orchestra.

The concert can be listened to live on all the frequencies of Radio Romania Culture and Radio Romania music both nationally and in live straming on the internet on www.radiorormaniacultural.ro and www.romania-muzical.ro.

Tickets are available on www.bilete.ro, at the Romanian Post offices, at the 'Bilete.ro'marked Inmedio Shops, at the Germanos Shops and at the Radio Hall's box office.

For further Orchestra and Radio Choir-related information, please visit www.orchestraradio.ro or www.orchestraradio.com. Via means of public transportation, the Radio Hall can be reached by taking trams No. 22 and No. 44 to the 'Radio România' stop - Virgiliu Market (Berzei Str. at the crossroads with Știrbei Vodă, close to Berthelot Str.). You may also choose other nearby means of transportation - Mircea Vulcănescu Str., Știrbei Vodă Str., Eroilor Blvd., Calea Plevnei, Dinicul Golescu Blvd. - buses 133, 178, 126, 168, 226, 368 and so on.