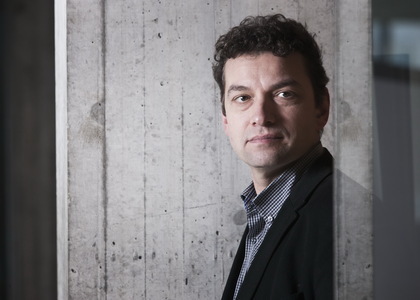 Swiss Evening at the Radio Hall, with the Conductor Kaspar Zehnder and the Cellist Răzvan Suma

Wednesday, 22nd April, starting at 19:00, the Radio Chamber Orchestra presents a special event: a Swiss musical evening, a beautiful symphony concert conducted entirely under the auspices of the country of the cantons, particularly known for its numerous values, some of the main points being the watches, their precision and... chocolate!

He was the chief conductor of the Prague Philharmonic Orchestra (2005-2008) and the musical director of the Paul Klee Center in Bern (2005-2012), where nowadays he is flutist and conductor of the Paul Klee ensemble. During the 2014-2015 season, he is being invited to conduct the Kremerata Baltica ensemble at the Châtelet Theatre in Paris, the English Chamber Orchestra at a gala concert in the presence of HRH Prince Charles, Mozart's opera, The Abduction from the Seraglio, at the Metz Opera House; and he will perform alongside the tenor Joseph Calleja at the Auditorio Nacional de Música in Madrid.

Kaspar Zehnder has been permanently an ambassador of Swiss musical culture and his programmes contain works of his compatriots. The concert at the Radio Hall is also classified under this category of events. Thus, you will be able to listen to two scores signed by two Swiss musicians who marked the musical world in the first half of the 20th century: Arthur Honegger - Concerto for Cello and Orchestra and Frank Martin - Concerto for Seven Wind Instruments, Timpani, Percussion and Strings.

This event will be an opportunity for you to listen again to one of the most highly acclaimed and best-known Romanian cellists: Razvan Suma, whose connection with the concert held under Swiss auspices is not just an accidental fact! In August 2014, Răzvan Suma was invited for the second time to play at the Murten Classics Festival in Switzerland. Regarding the fact that the precision of the Swiss watches is legendary the evening's repertoire will include Symphony No. 101, named The Clock, one of Haydn's creations. In a beautiful idea of intercultural musical dialogue, the programme of the evening will also include one of George Enescu's works: Two Intermezzi for a String Orchestra.

The event is carried out with the support of: Swiss Sponsors' Fund - Axpo, Holcim, Nestlé, Novartis, Fidexpert, Geberit, KPMG and Roche.

You can listen to the concert live on all Radio Romania Culture frequencies and Radio Romania Music at home and in live streaming on the internet on the websites: www.romania-muzical.ro and www.radiorormaniacultural.ro.

Tickets are available on www.bilete.ro, at the Romanian Post Offices, at the Inmedio stores marked "Bilete.ro", at the Germanos stores and at the Radio Hall ticket office.