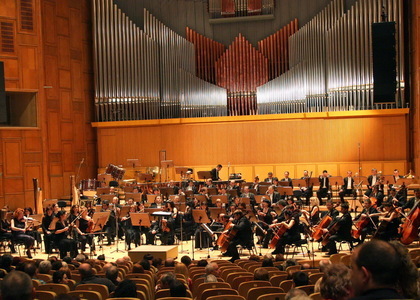 Friday, 24 April 2015 , ora 10.02
On Friday, 24th April, at 19:00 Bogdan Zvorişteanu returns to the Radio Hall stage, with his Gagliano violin (made in 1761), which is part of the universal patrimony, to perform with the National Radio Orchestra, Concert no. 3 for Violin and Orchestra, composed by the French Romantic composer Camille Saint-Saëns. Saint-Saëns` third and last violin concert was dedicated to the great Spanish violinist (and composer) Pablo de Sarasate, who actually performed the piece for the first time in October 1880.

The concertmaster of the prestigious Suisse Romande (Switzerland) orchestra - starting with the year 2002, the violonist Bogdan Zvorişteanu had previously occupied the same position in the Philharmonic Orchestra in Santiago de Compostela (Spain) and in the chamber orchestra in Pforzheim (Germany), performing recitals and concerts in Europe, Argentina, Canada, China, South Corea and Japan. Bogdan Zvorişteanu continued his musical development begun in Bucharest at the International Music Acadmy Menuhin in Gstaad/Blonay - Switzerland where he did benefit from the guiding of maestro Alberto Lysy. Participating in numerous international competitions , such as, the 'George Enescu' International Festival inBucharest, the Tibor Varga Festival in Sion, the Leopold Mozart Competition in Augsburg and the International Competition in Geneva, he has won prestigious awards and nominations throughout the years.

The concert was carried out under the baton of the German conductor Gerd Schaller, who is famous for having a rich activity at the stands of the most famous German orchestras and for having an impressive repertoire (over 100 symphonies, over 50 ballet and opera titles and numerous concertante works). Gerd Schaller collaborated with the State Orchestra and the Radio Philharmonic Orchestra from Hanovra, the Chamber Philharmonic Orchestra from Leipzig, the George Enescu Philharmonic Orchestra, Symphony Orchestra of the Prague National Theatre, the Munich Radio Orchestra, the Budapest Radio Orchestra, the Orchestra of the National Opera in Warsaw,etc. He was the chief conductor of the State Theatre Orchestra in Braunschweig and between 2003-2006 he was the artistic director of the Magdeburg theatre.

The evening's programme at the Radio Hall will include two other scores: Vivaldi`s famous overture to Nabucco and Franz Liszt`s Dante Symphony; the second work is performed together with the Academic Radio Choir, conducted by Dan Mihai Goia. Inspired by Divina Comedia, Dante Symphony presents Dante Alighieri`s journey through Hell and Purgatory. This composition was performed for the first time in Dresden in November 1857, with Liszt himself at the conductor`s stand and was unofficially dedicated to his friend (and future son-in-law) the composer Richard Wagner.

The concert can be listened to live on all Radio Romania Culture and Radio Romania Music frequencies throughout the country or in streaming live on the internet on the websites: www.radioromaniacultural.ro and www.romania-muzical.ro.

Tickets are available on www.bilete.ro, at the Romanian Post Offices,at the Inmedio Stores marked as "Bilete.ro", at the Germanos Stores and at the Ticket Box Office of the Radio Hall.