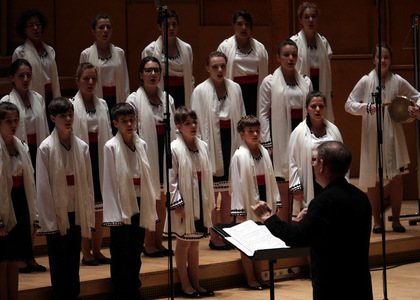 The Romanian Radio Children's Choir, one of the Romania's artistic ambassadors abroad, often invited to perform in international festivals and involved in multiple cultural projects in Romania and abroad celebrates seventy years of activity this year.

You are all invited, regardless of age, to the SEVENTY SPRINGS anniversary concert at the Romanian Radio Hall on Saturday, 25th April, at 19:00. The ensemble has been performing complex compositions out of the ordinary borders of a common concert over the last seasons, events in which music, acting and stage props got together with the video projections in the Romanian Roots, Walt Disney's World, Cheerful Greeting of a Pioneer, etc.; this time under conductor Voicu Popescu's baton you will listen to some of the most beautiful scores from the ensemble's repertoire which have been composed along the years.

'At it's 70th anniversary the Romanian Radio Children's Choir performs in front of its audience in a concert which pays homage to all the people who represent a part of its history. I want to express my gratitude to all those who offered their childhood to the Romanian Radio Children's Choir along the years. Today's generation owes enormous to the children, their parents and all those who have sustained, promoted and sponsored the artistic performances during its seventy-year existence . I want to tell the parents who want their childrens' lives not to be darkened by the lack of sensitivity and tolerance , things which have been so present recently, that here, at the Romanian Radio Children's Choir the children can enjoy special training conditions; here, we provide them a background where work discipline , cultural diversity and artistic accomplishment give children the chance to learn how to feel and live an enjoyable life' - stated the conductor Voicu Popescu.

The reputed song the Danube Waves composed by Iosef Ivanovici will account for a special moment at the end of this multi-media complex performance. Alongside the Choir's present members there will be the former members on the stage, as well; it is going to be a beautiful meeting among generations. As the Romanian Radio Children's Choir represents an arch between generations, between the youngest children who have just entered the world of musical notes and staves and the teenagers who leave the ensemble, the penultimate - Rundadinella piece composed by Carl Orff will bring the preparatory class onto the stage, as well. In the evening's programme there will also be performed works composed by Bach, Fauré, Mozart, Pergolesi, Britten, etc.

The event will be accompanied by Magdalena Faur who will play the piano while Ilinca Lorenz will play the percussion. Daniela Nartea will be the host of the show. The anniversary concert is sponsorized by Eurolines Romania, BRD - Group Société Générale, Carrefour and Sweet Kandia.

In the course of these special events programmed during this anniversary year the Romanian Radio Children's Choir performed in Volos-Greece, on 26th March at the opening concert of the Evmelia International Music Festival, one of the renown musical events in Greece, and very appreciated in Europe, as well. Conducted by Voicu Popescu the choir had 100% exclusivity in the opening concert of the festival and it was the only ensemble invited to perform in the inauguration of the IVth edition of the event. The choir is going to be on tour to Milan (within the Universal Exhibition in Milan, 2015 events), to Lugano (Switzerland) and to Munich, where it will perform in the finals of the prestigious Let the Peoples Sing International Choral Competition organized with the European Broadcasting Union's assistance.

The Romanian Radio Children's Choir has scored an amazing development since 1945, the year it was founded and made its first appearance in the Romanian musical world. Its founder, the conductor Ion Vanica together with Elena Vicica and Eugenia Văcărescu Necula have gone a long way towards the artistic destiny of the ensemble and turned it into an authentic school for cultivating the young people by means of music. It was the starting point for developing the artistic career of Ileana Cotrubaş, Silvia Voinea, Maria Hurduc, Cornelia Angelescu, Voicu Enăchescu, George Crăsnaru, Dan Dumitrescu, Roxana Briban, Roxana Constantinescu, etc.

The fifty participations of the choir in festivals, artistic tours and international competitions in almost every country in Europe, Japan, the United States of America and Canada have brought to the young artists precious awards and prizes, such as the Cultural Ambassador of the European Union title awarded by the European Choral Association in 2004. The choir's performances can be listened to on the radio, on television, in special radio recordings and on albums . Its recitals, a cappella concerts, its contributions to interpreting vocal-symphonic masterpieces next to the Romanian National Radio Orchestra, the Romanian Chamber Radio Orchestra, the George Enescu Philarmonic Orchestra, the Munich Philharmonic Orchestra and the Bavarian State Orchestra, under the baton of great Romanian and foreign maestros, such as: Iosif Conta, Ludovic Bacs, Horia Andreescu, Christian Badea, Jing Wang, Lawrence Foster, Wayne Marshall, Zubin Mehta - have brought to light the uppermost performing capacity of the choir.

The Romanian Radio Children's Choir has remained dedicated to the Romanian classical and contemporary choral songs and has been promoting them both in Romania and abroad. This is how the Impressions project arose; it is presented as the Romanian Roots project abroad and proposes the audience a journey into the Romanian inwardness mirrored by choral music. This multi-media vision was brought out to the World Symposium of Choral Music organized by the International Federation for Choral Music in Copenhagen (in 2008) within the Europe Days - in Neudrossenfeld Germany, at the Let the Future Sing Festival - in Sweden and at the International Thracian Choir Festival in Bulgaria (2009).

In 2010 the Romanian Radio Children's Choir celebrated its 65th anniversary and participated into From Apprenticeship to Craftsmanship project dedicated to the students who attend the conducting classes at the National University of Music in Bucharest. Alternately, they performed the Magnificat anima mea Dominum composed by J.S. Bach alongside with Il Gardelino Belgium Baroque Orchestra and the harpsichord player Ketil Hausgang at the Old Music Festival.

For the beauty of the Earth was the project of the year 2011 and it presented the national and international premiere of the the Opereta Ecologica en Quatro Actos piece composed by Alberto Grau and performed at the George Enescu International Festival.

The tickets can be bought on the www.bilete.ro website, at the Romanian Post Offices, the Inmedio Shops signaled 'Tickets.ro', the Germanos Shops and the Romanian Radio Hall Box Office.