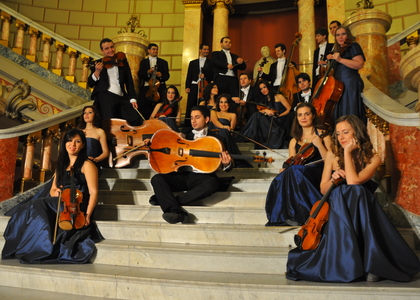 Royal Camerata at the Romanian Atheneum

The closing concert of Royal Season will have as guests the conductor Vlad Vizireanu and the violinist Stefan Horvath and proposes the audience a special program that includes works of famous romantic composers.

He studied with renowned teachers as Franz Welser Most within the residency of Cleveland Orchestra in Jacobs School of Music at Indiana University, James DePriest, Larry Rachleff, David Effron, Gustav Meier and Marin Alsop at Cabrillo International New Music Festival. Vizireanu was awarded Second Prize in the 11th International Cadaqués Conducting Competition where he conducted the Cadaqués Symphony in an internationally televised concert in L'Auditori Hall, Barcelona.

In 2012 he made his debut at Romanian Atheneum with George Enescu Philharmonic Orchestra and Petru Ghenghea Orchestra and in autumun 2013 he was invited within "George Enescu" International Festival in a new project wih members of Pittsburgh Symphony Orchestra and members of Royal Camerata. In 2014 ition where he conducted the Cadaqués Symphony in an internationally televised concert in L'Auditori Hall, Barcelona. He was appointed the 2014 Lorin Maazel Conducting Fellowship at the Castleton Festival. Vlad Vizireanu was invited by Kurt Masur to study at the Manhattan School of Music Conducting Seminar and was also selected for two consecutive years as one of seven conductors from around the world to study with Bernard Haitink at the Lucerne Easter Festival where he conducted the Lucerne Festival Orchestra.

From 2015 he is assistant conductor at Thousand Oaks Philharmonic. Also,he is artistic director at "Enescu & The Americas.