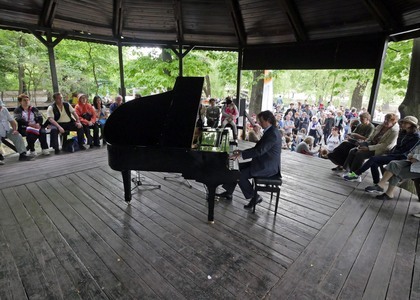 The Traveling Piano Has Ended Its Romantic Trip

Thursday, 21 May 2015 , ora 9.52
The 'Traveling Piano' International Tour, almost a tournament by now, has reached its 5th edition in 2015. As if he were in a romantic story, pianist Horia Mihail once more fought to capture the audience, to get it into contact with a highly delicate and masterful music, but also to raise the awareness of the need for a better pianistic infrastructure, even in the very small cities, where good quality musical events are highly appreciated. At the invitation of Radio Romania, the pianist headed out on 22nd March, covered 6000 km, having 24 concerts and recitals with a fully romantic repertoire, his performance being rewarded by thousands of spectators with lingering applauses whose echoes went out, after two months full of tours, in Bistrița on 20th May.

In its fifth year, the Traveling Piano provided by Radio Romania, was offered to the local community in Deva, city where Horia Mihail was greeted with enthusiasm and where he performed both a recital and an orchestra concert.

The Traveling Piano tour also went to unconventional locations. Horia Mihail, accompanied by a true concert piano, halted on the gazebo in the Herăstrău Park, where two outdoor recitals organized with the help of ARCUB took place. Music lovers and passers-by gladly accepted the invitation, thus having the opportunity to listen to the beautiful romantic works meant to be enjoyed by all, regardless of age.

At the tour's end, filled with the energy the audience always adds to his, Horia Mihail remembers the pleasant moments:

'It has been a long tour, with lots of km driven. There were 24 concerts and recitals that brought together an extremely numerous and enthusiastic audience, thing that can only make me happy since the fifth edition of this idea, called the Traveling Piano, seems to have confirmed the fact that this project has become a brand. I am very glad that the people living in the new cities that we visited for the first time in my career - Luduș in the Mureș county and Baia de Arieș in the Alba county - were extremely enthusiastic and happy to have me there.'

With its enthusiasm and appraisal, the Bistrița audience was the one concluding that: 'Any instrument can be carried around, but the piano... is heavy let alone the Traveling Piano. But there you go. Merely imagining it is difficult, but it can be done.' 'I think it came to pass really well. In this beautiful month, full of flowers, that's exactly what was missing, the piano, in order to complete the astonishing landscape, with its sound.' 'I saw that he went to distant towns and that's impressive. Because today you need culture.'