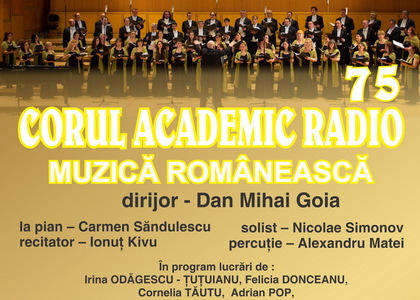 Friday, 24 April 2015 , ora 9.29
THE ACADEMIC RADIO CHOIR which is the most long-lasting vocal-symphonic ensemble in Romania turns the beautiful age of 75 years old in 2015. After a first a capella anniversary concert, which took place in February and which was dedicated to universal choral music, the ensemble proposes a beautiful Romanian music concert at the Radio Hall on Thursday, 30th April, 2015, at 19:00. The evening's programme will reunite vocal scores signed by musicians as Irina Odăgescu-ŢUŢUIANU, Felicia DONCEANU, Cornelia TĂUTU, Adrian POP, Radu PALADI and Vasile TIMIŞ.

The repertory was selected by DAN MIHAI GOIA, who has been the conductor of the Academic Radio Choir for 15 years.

ʺOver these 15 years since I have been in charge with the Academic Radio Choir, I have collaborated with many Romanian musicians, but the most closed relationship, the truest from the artistic and human points of view, I have had is the one with Irina Odăgescu-ŢUŢUIANU, Felicia DONCEANU, Cornelia TĂUTU, with ADRIAN POP and with the regrettable maestros Radu PALADI and Vasile TIMIȘ. I have strongly collaborated with every each of them, I have tried to understand their creative message and along with the members of the Academic Radio Choir, we have wanted to get close to the artistic truth in their works.

All the sounds and the musical moments that you will be able to enjoy with us will send your soul and your mind to some extremely beautiful musical areas, created with the aid of these choral creations that reach the genius of the six most important Romanian creators of choral music whose works - we owe to them - are included in this concert.ʺ DAN MIHAI GOIA commented on the event that he created and he will conduct.

Since 2000, Dan Mihai Goia has been the conductor of the Academic Radio Choir with which he participated in over 260 vocal-symphonic and a capella concerts. As a member of the ʺMadrigalʺ National Chamber Choir (between 1971-1995) he held concerts at the rack of this prestigious choir, being a period the deputy manager and assistant conductor of the ensemble.

Between 1997-2009 Dan Mihai Goia was the artistic manager and the conductor of the ʺTe Deum Laudamusʺ Orthodox Male Choir with which he had over 250 concerts in the entire country and abroad and he created five albums. Member of the 'Union of Romanian Composers and Musicologists', Dan Mihai Goia is the author of over 40 choral and chamber music works, a symphonic suite and the ʺSnow Whiteʺ ballet.

The concert will be held with the accompaniment of the pianist Carmen Săndulescu. On the playbill there can also be found the tenor Nicolae Simonov (the lyrical artist of the Academic Radio Choir whom you will appreciate as a soloist), Alexandru Matei - percussion and the actor Ionut Kivu who will recite during the concert. The presentation of the programme will be conducted by the musical critic Grigore Constantinescu.

The tickets are available on www.bilete.ro, at the Romanian Post offices, in the Immedio Stores entitled ʺBilete.roʺ, in the Germanos stores and at the ticket box office of the Radio Hall.

For further information concerning the Radio Orchestras and Choirs please visit the websites: www.orchestreradio.ro and www.orchestreradio.com. The access to the Radio Hall by public transport, can be made with Trams Nos. 24 and 44 to the stopʺRadioRomaniaʺ - Virgilius Plaza (Berzei Str. at the intersection with Ştirbei Vodă Bvd., close to Berthelot Str.). You can also choose any other means of transport nearby - Mircea Vulcănescu Str., Berzei Str., Știrbei Vodă Blvd., Eroilor Blvd., Calea Plevnei, Dinicu Golescu Bvd., the buses 133, 178, 126, 168, 226, 368, etc.