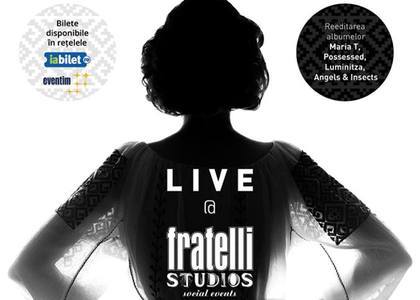 10 years after the release of the iconic Maria T album in 2005, the Bălănescu Quartet are back in Bucharest to present the novel classical/fusion project on Thursday, 28th May, 2015, 20:00, at Fratelli Studios, Glodeni Street 1-3.

The Maria T concert on May 28th also marks the re-editing of the album at the Universal Music Romania record company, next to three other albums from the Bălănescu Quartet catalogue - Possessed (1992), Luminitza (1994) and the Angels & Insects soundtrack (1995).

Scheduled to arrive in Bucharest in an extended formula, next to percussionist Steve Arguelles and visual artist Klaus Obermaier, the London quartet led by violinist Alexander Bălănescu is preparing a full audio/video show, a unique trip into the enigmatic yet so familiar universe of Maria Tănase.

Released in 2005, Maria T was, to Alexander Bălănescu, the result of his attempt to return to his musical roots. Having left Romania in his youth so that he could study music in Jerusalem, London and New York, Bălănescu - defining himself as a 'perpetual stranger' - has always tried to reconnect with the cultural heritage of our country.

'My aim was not to copy or adjust folk material, but to develop a new personal language by the means of my own musical experience - trying not to betray the spirit of the source-material, Bălănescu stated about the project. 'There is a sort of meeting, a bridge over time and cultural differences between our world and Maria Tănase's. That's why we use recordings of her voice over our live music in some places; the idea that we can somehow meet with the help of technology seems delightful to me', the artist said.

Tickets are available via Eventim, cost 65 lei (regular) and 120 lei (VIP). The ones buying VIP tickets will also receive the Maria T album for free at the concert, on the evening of the event.