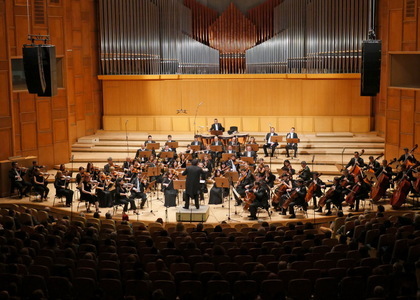 Serenades, Arias and Overtures at the Radio Hall!

Monday, 18 May 2015 , ora 11.15
On the eve of the season when the lovers` imagination becomes alive on a midsummer night's dream, the National Radio Orchestra invites you to the Radio Hall on Friday, 22nd May, 2015, at 19:00, to an evening dedicated to serenades!

A musical genre whose name was born from the Italian word "sereno" ("calm"), the serenade is a slow song, with a lyrical character, being initially dedicated to a person and close to the nocturne or divertismento compositions. Serenades have won fame in the Middle Ages as a piece performed by the protagonist in the evening or at night under the window of that person of whose heart he wanted to win.

Later in the Classical and Romantic periods, the genre developed exclusively in an instrumental form and moved away from the idea of being interpreted at night or outdoors, in honour of the beloved. Serenades have become a genre somewhere between a suite and a symphony, performed with a wide variety of instruments, but focusing mainly on light and romantic musicality.

Mozart is one of the composers who marked this genre. Some of his famous serenades are: Serenata Notturna (Serenade No. 6), Haffner Serenade (Serenade No. 7) and Eine Kleine Nachtmusik (known as the Little Serenade). There are some other great composers who composed serenades, such as, Beethoven, Schubert, Brahms, Tchaikovsky and Stravinsky.

Conducted by the Italian conductor DAVID Crescenzi, the evening's programme at the Radio Hall will begin with one of Mozart's serenades - Serenade No. 10 in B flat major - whose famous work was enhanced by its inclusion in the soundtrack of Amadeus (directed by Milos Forman), even in the sequence of the first encounter between Mozart and Salieri.

The event will continue with a "declaration of love" and extremely famous music score of four famous operas: the overture and the Ecco ridente in cielo aria from The Barber of Seville by Rossini, the Prelude and the Oh Lola aria from Mascagni's Cavalleria rusticana, the overture from the Marriage of Figaro opera by Mozart and the Deh Vieni alla Finestra aria from the Don Giovanni opera.

The concert at the Radio Hall will be held with the participation of lyrical artists, LUCIAN CORCHIŞ (tenor), LIVIU Indricau (tenor) and Basalic IORDACHE - (baritone), soloists of the National Opera with an extremely diverse repertoire in concerts held on the lyrical stages in Bucharest, but also in other opera houses in the country and abroad.

The tenor LUCIAN CORCHIŞ received the Audience's Award at the Oper Oder Spree in 2007 - the Festival and Competition in Beeskow (Germany) and in 2009 the special prize awarded by V'Amo & BDMI Vienna and Magda Ianculescu Masters of Lyrical International Art Competition organized by the NOB. Starting in 2006, he became a soloist of the National Opera, collaborating at the same time with the Hungarian Opera in Cluj-Napoca, the Romanian National Opera in Timisoara, the Oleg Danovski National Theatre of Opera and Ballet in Constanta, the Haifa Symphony Orchestra (Israel) the George Enescu Philharmonic in Bucharest, the Romanian National Opera in Iasi, the Mask Theatre in Bucharest.

LIVIU Indricău began his career as a lyrical artist in the National Opera Choir, currently being soloist at the same institution. He collaborated with the National Opera and Moldova Philharmonic in Iasi, the Mask Theatre in Bucharest, the Bucharest Philharmonic and the Piatra Neamț Philharmonic. He attended master classes held by the great lyrical artists, Eduard Tumagian , Marco Gandini and Enza Ferrari. The tenor has toured in Israel, Switzerland, South Korea and Germany. Liviu Indricau tackles lyrical works, such as, The Merry Widow operetta and the Die Fledermaus along with vocal-symphonic pieces and operas , such as: Carmen by G. Bizet , Puss in Boots by C. Trăilescu, I Capuleti e I Montecchi by V. Bellini, Gianni Schicchi by G. Puccini, La Cenerentola Cinderella) by Rossini, Rigoletto, Nabucco and La Traviata by G. Verdi, The Marriage of Figaro and Così Fan Tutte by W.A. Mozart.

The baritone IORDACHE BASALIC did international tours in England, Switzerland, Spain, Greece, Germany, Italy, Japan, Bulgaria, Denmark, the Netherlands and Thailand. Throughout his career he has collaborated with numerous foreign lyrical theatres , such as, the Concertgebouw in Amsterdam , De Doelen in Rotterdam, Chasse Theatre in Breda, Bunkamura Theatre in Tokyo, and also with important opera houses in the country - the Romanian Opera in Cluj , the Romanian National Opera in Timisoara ,the Brasov Opera House, the Moldova State Philharmonic in Iaşi, etc. In 1998, he won the award for best singer of the year for Georgio Germont's role in Verdi's La Traviata, awarded by the "Musical News" magazine. In 1999 he was awarded the Special Prize of the jury at the Hariclea Darclée International Singing Competition in Braila.

You can listen to the concert live on all Radio Romania Culture and Radio Romania Musicfrequencies from home and live streaming on the Internet and on the websites: www.romania-muzical.ro and www.radiorormaniacultural.ro.

The tickets are available on www.bilete.ro, at the Romanian Post Offices, in the Inmedio stores marked "Bilete.ro", in the Germanos shops and at the Radio Hall ticket office.

For more information concerning the Radio Orchestras and Choirs, please visit the websites: www.orchestreradio.com and www.orchestreradio.ro.The access to the Radio Hall, by public transport, can be done by tram nos. 24 and 44 to the "Radio Romania" stop - Virgil Square (Str. Berzei the intersection with Str. Ştirbei Voda, near the Str.Berthelot). You can also choose the means of transport nearby - Str. Mircea Vulcănescu, Str. Berzei, Str. Ştirbei Voda, Eroilor Blvd. Calea Plevnei, Blvd. Dinicu Golescu - bus nos. 133, 178, 126, 168, 226, 368, etc.