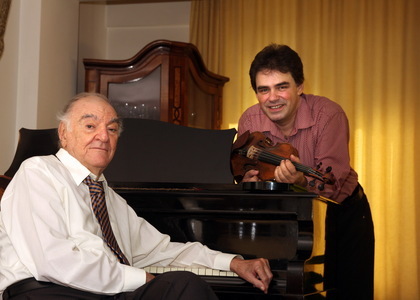 Thursday, 11 June 2015 , ora 11.15
A year ago, at the end of the previous season, exactly on 27th June, 2014, the story of a series of four recitals - THE COMPLETE SONATAS FOR PIANO AND VIOLIN BY BEETHOVEN - began at the Radio Hall, performed by the of the most accomplished Romanian musicians - the pianist VALENTIN GHEORGHIU and the violinist GABRIEL CROITORU.

Since last year's event, which marked the inauguration of the newest Steinway piano of the Romanian Radio Hall, another season has passed by, too, which is now coming close to its end. After three recitals performed by the two artists on this stage in Bucharest - every time with three ever different sonatas out of the ten composed by Beethoven (June 2014, February and April 2015) - the time has come for the last "episode" of this beautiful musical "series".

On Thursday, 18th June, at 19:00, at the Radio Hall, you are invited to the fourth and last recital of this series of Complete Sonatas for Piano and Violin by Beethoven, this time along with the two musicians' names, being also present on the playbill one of the greatest Romanian cellists: MARIN CAZACU.

The Beethoven recital proposes to you a remarkably attractive repertoire: the Piano Sonata No. 9 for Piano and Violin - also known under the title of the Kreutzer Sonata (after Rodolphe Kreutzer's name, considered one of the greatest violinists of his time). The notoriety of the work was enhanced by the novella bearing the same name, written by Dostoyevsky, which led to some great scandals at the time, as it spoke about the reasons behind a man's killing his wife.

You will also listen to the Trio for Piano, Violin, and Cello in C minor - surnamed the Archduke, dedicated to Rudolf Archduke of Austria, amateur pianist and pupil of Beethoven, to whom the great composer dedicated no less than fourteen of the scores that bear his name !

The meeting onstage for the three Romanian musicians is doubled by the playing of the three extremely valuable musical instruments, that do honour to their "maestros " who will be handling them with talent. I am talking about the newest STEINWAY piano belonging to the Romanian Radio Hall, the GUARNIERI violin that belonged to George Enescu, now under the management of the "George Enescu" National Museum- now in the use of violinist Gabriel Croitoru - and the Lorenzo Ventapane cello (1820) which will be played by Marin Cazacu.

VALENTIN GHEORGHIU became notrious as a remarkable pianist and Romanian composer, collaborating with important names in the classical music world, along with whom he performed in Austria, France, Germany, the USA, Switzerland, Italy, Great Britain, Sweden, Norway, Canada, Spain, Japan, etc. Beside his exceptional activity as a soloist, marked by recitals and concerts, Valentin Gheorghiu dedicated himself to chamber music, too. He also made many recordings, some of which were edited by recording labels throughout the country or abroad.

He was awarded several prizes during international piano competitions. At the moment he is a member of the juries of the following competitions: "P. I. Tchaikovsky", "Van Cliburn", "Fr. Chopin", "A. Rubinstein", L. van Beethoven", "R. Schumann" and "J. S. Bach". Over time, Valentin Gheorghiu has been awarded the First Mention in the "George Enescu" Awards (1946), he was distinguished with the award of the Romanian Academy (1961), and both The National University of Music Bucharest and The George Enescu University of Arts in Iași conferred upon him the title of Doctor Honoris Causa.

GABRIEL CROITORU, soloist of the Radio Orchestras and Choirs, has been appreciated in his over one thousand performances onstage. He has evolved as a soloist, accompanied by one of the most important orchestras in the world, such as: the Royal Philharmonic Orchestra based in London, the Queen Sofía Chamber Orchestra, the Symphony Orchestras from Monte Carlo, Saloniki, Malaga, Seville, Cannes, Lyon and others. He was applauded after recitals in: France, Spain, Germany, Belgium, the Netherlands, Italy, China and the U.S.A. Starting from 2011 he has performed several national grand tours under the title "The Duel of the Violins" (along with Liviu Prunaru and Hora Mihail) and the "George Enescu's Violin Travelling to Rural Areas" (along with Horia Mihail).

On 22nd January, 2015, Gabriel Croitoru was applauded along with the violinist Liviu Prunaru and pianist Horia Mihail in an extraordinary recital in London, part of an ample programme of events dedicated to George Enescu, to 60 years after his death, events organized by The Romanian Cultural Institute in London.

Manager of the "Tinerimea română" National Art Centre (from April 2014), MARIN CAZACU is a concerto soloist of George Enescu Philharmonic (from 1993) and has performed intensely in Romania as well as in Europe, Asia and on the American continent, under the wand of several famous conductors. He appeared in several chamber formulas along with prestigious artists and was applauded as a member of the Pro Arte Trio (the official chamber ensemble of the 'George Enescu' Philharmonic) and collaborator of the Voces Quartet. His name often appeared on the playbills of some of the most important festivals, such as those in Berlin, Bratislava, Bucharest, Hong-Kong, Macao, Munich, Milan, Osaka, Singapore, Tokyo, Valencia and Venice.

Marin Cazacu is professor at the National University of Music in Bucharest, his students making their own name onstage in our country and abroad. In 1998, he founded the Cellissimo Quartet - along with Alexandra Guțu, Răzvan Suma and Olga Mănescu - and along with his students he performs recitals of eight up to twenty cellos in the Violoncellissimo ensemble.

In 1999, Marin Cazacu founded the George Enescu and World Music Festival, which takes place in Sinaia each summer. For the organization of this festival and the foundation of the first National Youth Orchestra (The Romanian Youth Orchestra under the wand of Cristian Mandeal), he was awarded in 2008 "The Project of the Year" prize and in 2012 the Radio Romania Culture Award for the success of the International "Enescu and World Music" Festival (the 12th edition) and of the The Romanian Youth Orchestra national project.

You can listen live to the concert on all Radio Romania Culture and Radio Romania Music frequencies throughout the country and in the live streaming on the Internet on the websites: www.radioromaniacultural.ro and www.romania-muzical.ro. The tickets are available on www.bilete.ro, at the Romanian Post Offices, in the Inmedio Shops signaled with "Bilete.ro", in the Germanos shops and at the box office of the Romanian Radio Hall.

For further information related to the Radio Orchestras and Choirs, please visit the websites: www.orchestraradio.ro and www.orchestreradio.com. Access to the Radio Hall: trams nos. 24 and 44 to "Radio România" tram stop - Virgiliu Square (Berzei Street at the junction with Știrbei Vodă, near Berthelot Street). You can also choose from the other transportation options nearby - Mircea Vulcănescu Street, Berzei Street, Știrbei Vodă Street, Eroilor Boulevard, Calea Plevnei, Dinicu Golescu Boulevard - buses nos. 133, 178, 126, 168, 226, 368 and others.