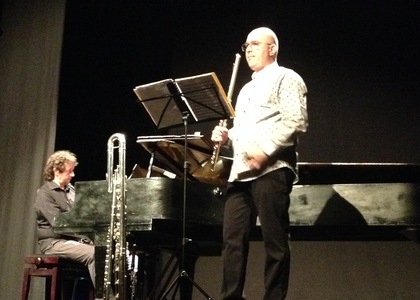 The Magic Flute and the Travelling Piano Met in Tulcea

The second destination of the The Magic Flute Tour has been Tulcea this year, the city by the bank of the Danube, where, on a hot summer evening, near the water bank - where the special light coming from the setting sun was reflecting on the water - two musicians, five different flutes and the Travelling Piano, brought the joy of listening to good-quality music to a public, who was also warm and special.

The fifth edition of the "The Magic Flute" National Tour, which is a Radio Romania project in collaboration with flautist Ion Bogdan Ștefănescu and pianist Horia Mihail, takes place between 11th - 27th June, 2015.

Ion Bogdan Ştefănescu has once again managed to reach the soul of the people in the audience, by choosing a repertoire with a high level of spectacular and diversity in it. But the evening's element of surprise was the fact that the flautist presented the people in the audience the entire woodwind family. Spectacular instruments, which originate from the Land of the Rising Sun, stopped in Tulcea probably for the first time. Beside the already famous golden Muramatsu flute, the Yamaha wooden flute, a Yamada piccolo flute, a Sankyo alto flute and a Kotato bass flute, all these brands being the most valuable brands worldwide, could be heard that evening.

This recital, too, was possible thanks to the generous initiative of Radio Romania Music. The Travelling Piano, which is intensely used in recitals, concerts, plays and other events, remained here in 2013. Even an international jazz festival was organized here thanks to the presence of the Travelling Piano on the stage of the Jean Bart Theatre. But the tours organized by Radio Romania, too, have Tulcea as a stopping point and Horia Mihail is always happy to meet again his former travelling partner.

- It has been an extraordinary recital. I came last year too, but this year's recital has been so special due to the sound of so many flutes.

-This is a combination of musical instruments which has always enchanted me. The sound of the flute and that of the piano. Soothing.

- I loved the musical works. They were very well-chosen. And the performance of the two musicians was also wonderful.

- I am leaving the concert in good spirits. I am going to take a walk on the seafront to prolong these feelings. I wish there were more musical events as such in our city, declared the spectators in Tulcea.

Asked about his relationship with these instruments, Ion Bogdan Ștefănescu declared the following:

Partners: the Athenee Palace Hilton and the "Pantex" Hotel in Braşov