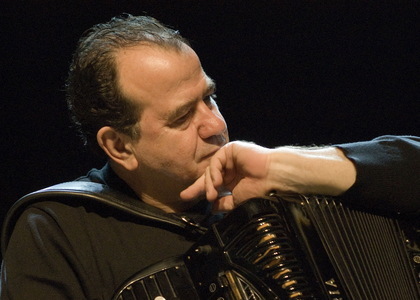 Thursday, 23 April 2015 , ora 10.32
The French accordionist, Richard Galliano, one of the greatest musicians in the world, returns on the stage of the Radio Hall, in an important concert, alongside the Radio Chamber Orchestra and the violoncellist, Răzvan Suma, under the baton of Gabriel Bebeşelea, one of the most appreciated young conductor.

Galliano, who composed over 400 works, will play on Wednesday, 29th April, at 19:00 one of his creations - Contrastes (a suite for accordion, violoncello, and string orchestra) - and a Mozart concert, in his arrangement for accordion - Concerto in A Major for clarinet and orchestra. The evening's repertory will also offer you another score belonging to the greatest Amadeus: Divertismento in D Major.

Being also fond of classical music and jazz, performer, composer, arranger and educator, Richard Galliano is the one who reinstated the accordion and offered it a new position on the most important stages in the world. As he promised to himself when he was fourteen years old, Richard Galliano offered the accordion the position of a solo instrument in concerts, he modified its approach to rhythm, its harmonies and especially he demonstrated that it was also suitable for jazz.

At the age of fourteen, he started playing the accordion under the guidance of his father, at the same time accomplishing his musical studies at the Conservatory of Nice. At twenty-three, he was already a famous musician in Paris, well-known as an arranger, conductor and composer also interested in jazz music. He collaborated in concerts and radio, television and film recordings with French music stars, such as, Claude Nougaro, Barbara, Serge Reggiani, Charles Aznavour, Juliette Gréco, etc.

In 1983, the stage of the French Comedy witnessed an event marking the music history of the century: the meeting between Astor Piazzolla and Richard Galliano, representing the beginning of a beautiful friendship and artistic collaboration. At Piazzolla's advice, Galliano returned to the roots of French music, re-established the entire traditional repertory of valse-musette, java and tangos and initiated a new musical current entitled New Musette, as well as the manifest-album that appeared in 1993 and was awarded the Django-Reinhardt Prize by the Jazz Academy. In 1996, together with his famous Victoria accordion he went to the USA, where alongside George Mraz, Al Foster and Biréli Lagrène recorded New York Tango, an album that received a great number of prizes.

His life-long collaboration with his father and his wish to transmit the others his fabulous experience as a performer, gave birth to a new accordion method that was awarded with the Sacem Prize for the Best Pedagogical Work in 2009.

RĂZVAN SUMA is one of the most active Romanian musicians, with a broad repertory, which he performed in hundreds recitals and concerts worldwide. Răzvan Suma was invited in August 2014, for the second time to the Murten Classics Festival (Switzerland). In November, he had a broad successful tour in Argentina and on 1st December, 2014, he played in Lisbon, being invited by the Romanian Cultural Institute. On 9th April, 2015, Răzvan Suma was once again applauded at the Great Patriarchal Cathedral in Lisbon, in a concert performed on the inauguration of the new location of the Romania Cultural Institute.

In 2009, Răzvan Suma became the soloist of the Radio Orchestras and Choirs. Under the title of Do You Like Bach? he performed in his first solo international tour in 2012; the event was an absolute premiere in Romania in the classical music domain: the first performance of a Romanian artist in one single concert, of the complete Bach solo cello suites. The two editions of the tour were performed in Romanian seventeen cities and over 10,000 spectators attended them. To continue this beautiful initiative, Răzvan Suma proposed to all the concert-goers from thirteen cities, the Do You Like BRAHMS ? National Tour, performed alongwith the Spanish pianist Josu Okiñena between 8th and 29th October, 2013. In the autumn of 2014, he performed the Do You Like Tango? National Tour with Analia Selis and the Argentinian guitarist and composer Julio Santillian The concert can be listened to live on all Radio Romania Culture and Radio Romania Music frequencies from the country and streaming live on the internet on www.radiorormaniacultural.ro and www.romania-muzical.ro.

The tickets are available on www.bilete.ro, at the Romanian Post Offices, in the Inmedio stores marked as " Bilete.ro ", in the Germanos shops and the Radio Hall box office.