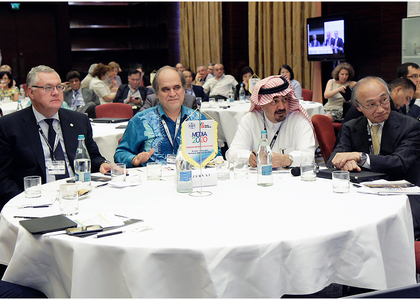 The Media 2020 Conference – a Bridge Between Continents

Wednesday, 1 July 2015 , ora 9.57
The Media 2020 Conference – Bringing Media to the Future organized in Bucharest by Radio Romania Music and the Asia-Pacific Broadcasting Union (ABU) closed today in continuous applause for the organizers.

The main theme approached during the second day of the event, was the impact that social networks had in social media at  the global scale.

Abdulrahman Alhazzaa, President of Saudi Broadcasting Corporation, emphasized the importance of social media  and also talked about its unseen threats: “We love social media, but we should not believe anything. Let’s check and double-check any piece of information  coming  via the social media.

At his turn, Vijayalaxmi Chhabra, General Manager of Doordarshan India, the largest provider of public of broadcasting worldwide, stated that “(…) despite all setbacks, the radio will survive to the Internet.”

“The radio is still a very strong medium in the current media landscape, but in order to remain competitive, it must constantly improve its products.” – this is the conclusion of the General Secretary of PBI Japan, Toshiyuki Sato, which pertained  from the debates held today.

Dr. Javal Motttaghi, the General Secretary of Asia-Pacific Broadcasting Union, emphasized the same idea at the end of the conference: “The content rules! The main responsibility of each and every broadcaster is that of offering quality content. It is only by these means that we can keep and gain the audience.”

Graham Ellis, Deputy Director of BBC Radio, sent his thanks to Romania and the General Manager, Ovidiu Miculescu, because  this meeting in Bucharest, “(….) has helped build a bridge between Europe and Asia.”

Ovidiu Miculescu thanked the panellists and all participants for the quality and the content of the talks and contributions, which, he said, opened up new perspectives. He emphasised: “Radio Romania is and will be in the future, too, a reliable partner. We intent that for the 2017 edition of the Media 2020 Conference,  which is again to be hosted  in Bucharest, to invite Google and Netflix giants …we’ll see by then if radios and televisions are indeed their rivals or their partners.”.