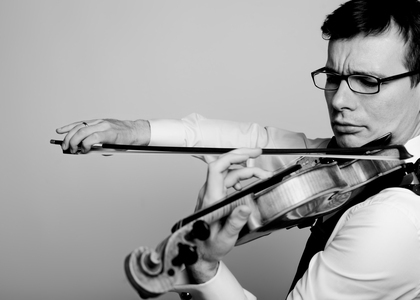 Monday, 12 October 2015 , ora 9.47
On Friday, 16th October (19.00), Alexandru Tomescu - the soloist of the Radio Choirs and Orchestras and also one of the best known Romanian violinists - is greatly honoured to play the Elder-Voicu Stradivarius violin in his first concert of the new season at the Radio Hall ! This concert is performed by the National Radio Orchestra under the baton of Mihail Agafiţa - the conductor and Musical Director of the Symphony Orchestra of the Moldova National Philharmonic - who offers you a special presentation of the Czech symphonic repertoire. You will listen to two scores signed by the greatest composers of the Czech Republic, Vltava by Smetana, 'the father' of Czech music, and Symphony No.8 by Dvořák, who is considered to be the most popular Czech composer.

The concert will begin with Vltava (by Bedrich Smetana), the most popular part of the suite made up of six symphonic poems entitled Má vlast (My Country). Each poem describes places, legends and moments in the history of the Bohemian region. The work you will hear at the Radio Hall, which is known under the German title Die Moldau, resembles a very beautiful painting made of sounds that depicts one of the largest rivers in Bohemia. The audience will go on an imaginary journey along the Vltava river from its source to its mouth. On this occasion, the village life, as well as images of the ruins and castles in Bohemia, the village customs and the image of Prague where Vltava river passes will be conveyed through music. Alexandru Tomescu will perform one of the highly appreciated violin scores: Concerto in E minor for Violin and Orchestra signed by Mendelssohn, a wonderful work of the Romantic repertoire. The evening will end with Symphony No.8, which was created by another great Czech composer, Antonin Dvořák; this work's first performance in Prague, in 1890, was conducted by the composer himself, on the occasion of his election as a member of the Bohemian Academy of Science, Literature and Arts.

Alexandru Tomescu performed both with the Radio Chamber Orchestra and with the National Radio Orchestra on many occasions on stage at Radio Hall, but also abroad, in European and Asian tours. Alexandru Tomescu performed at famous halls in the great musical cities, such as Carnegie Hall (New York), Walt Disney Concert Hall (Los Angeles), Théâtre des Champs Elysées (Paris), Concertgebouw (Amsterdam), etc. The Stradivarius Tour, which is centered around the collection violin he is performing on, is an annual event that took the young violinist all over the country many times. He has performed the three greatest complete cycles of the solo violin repertoire - the 24 Caprices by Niccolo Paganini, the Six Sonatas by Eugene Ysaÿe and the six Sonatas and Partitas by Johann Sebastian Bach. Each of these tours were followed by the lauching of either a DVD or an album, all of which had great success.

Mihail Agafiţa has conducted about five hundred symphonic concerts, opera and ballet performances in the last twenty years with orchestras from Romania, Moldavia, Spain, Finland, USA, Russia, Ukraine and Belarus. He went on many different tours in Greece, Portugal, Italy, France, Malta and Tunisia. The milestones of his career are his collaboration with Moscow Philharmonic Orchestra, on the one hand, and his participation at the 'George Enescu' International Festival (Bucharest, 2011) behind the music rack of the in Transylvania State Philharmonic Orchestra of Cluj-Napoca, on the other hand. Among the ensembles that were conducted by Mihail Agafiţa are all the National Orchestras in the Republic of Moldova, Chișinău and the ones in the Republic of Belarus, Minsk, the Romanian Radio Chamber Orchestra, all the Philharmonic Orchestras in Romania, Pori Sinfonietta in Finland, Owensboro Symphony Orchestra, Ohio University Symphony Orchestra in USA, all the Opera and Ballet Theatres in Chişinău and Saint Petersburg State Ballet on Ice in Russia, among many others.

The concert can be listened to live on all Radio Romania Culture and Radio Romania Music frequencies in the country and live streaming on the Internet at www.radiorormaniacultural.ro and www.romania-muzical.ro.

For further information related to Radio Choirs and Orchestras please visit our websites www.orchestraradio.ro or www.orchestreradio.com.