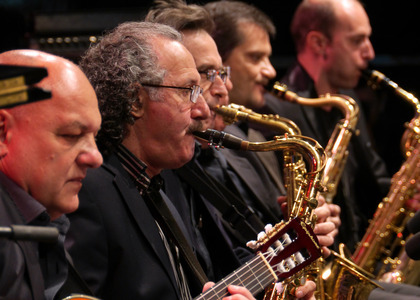 Wednesday, 7 October 2015 , ora 9.57
This is one of the long-standing orchestras in Romania, which is dedicated to various types of entertainment music, from jazz to pop or blues; an ensemble whose name is connected to the Golden Stag Festival in Braşov or the Mamaia Festival and which has a record of numerous collaborations with television and audio recordings; this is the RADIO ROMANIA BIG BAND. Even though the Radio Hall is probably often associated with classical music, the jazz evenings offered by Radio Romania Big Band - conducted by IONEL TUDOR - in the last years are events that one should not miss!

On Wednesday, 14th October (19.00), RADIO ROMANIA BIG BAND invites everyone to the first concert from the 'ROMANIAN JAZZ' series in the 2015-2016 season at the Radio Hall. The event organised under the name 'RADIO BIG BAND 66 and its Illustrious Soloists' marks the anniversary of the beautiful age of Radio Romania's ensemble; plans are to bring a part of the soloists who have contributed to the success of the Big Band's concerts in the last seasons in front of the audience. Therefore, its members will be able to applaud DRIAN COJOCARU (trombone), CRISTIAN SOLEANU (saxophone), GEORGE NATSIS (piano) SEBASTIAN BURNECI (trumpet), AMARIAN GEORGESCU (guitar) and LAURENŢIU ZMĂU (drums).

The 'ROMANIAN JAZZ' series, which is coordinated by Sebastian Lungu, takes place every month at the Radio Hall since 2013. It was initially held in Radio Romania's 'Alfred Alessandrescu' Studio, but its location changes due to the multitude of people who wanted to attend these concerts.

In 1949, to diversify the radio broadcasts, it was decided that entertainment music should receive a proper professional representation, which was when this sort of ensemble was established; thus, the current Radio Romania Big Band was born. Important maestros, conductors and composers, such as Sile Dinicu, Cornel Popescu, Ion Cristinoiu and Ionel Tudor have contributed to the activity of this ensemble. Radio Romania Big Band has held many concerts, has collaborated for TV shows and has participated at many festivals - especially at the festivals in Mamaia and Braşov. Made up of instrumentalists of great value, the Radio Big Band has created a true school of interpretation, improvisation and orchestration.

The concert is held under the baton of the Radio Big Band's conductor, IONEL TUDOR, a highly appreciated and awarded composer and orchestrator. One of his greatest accomplishments is the 8-9 position of Romania at the Eurovision Contest in 2002 (with the song Tell Me Why by Monica Anghel and Marcel Pavel).

Ionel Tudor's connection with the Radio Big Band is an entirely special one - it started since he was fourteen, when he performed as a pianist under the baton of Sile Dinicu. In 1981, he made his debut as a composer; he has become a renowned and appreciated orchestrator, being requested by most of the Romanian composers and soloists ever since.

In 1991, he was appointed as a pianist of the Radio Big Band; he has performed numerous light-music, jazz and blues concerts, recitals and galas with this ensemble. He accompanied the ensemble on the prestigious stages of the Bucharest International Festival, the Golden Stag International Festival in Braşov and the Mamaia Festival. As the conductor of this ensemble, he has succeeded in diversifying the Radio Big Band's activity; besides light music, they also performed jazz, blues and even rock.

The concert can be listened to live on all Radio Romania Culture and Radio Romania Music frequencies in the country and live streaming on the Internet at www.radiorormaniacultural.ro and www.romania-muzical.ro. Tickets are available on www.eventim.ro, at Germanos, Orange, Vodafone, Domo and Carrefour shops, Cărtureşti and Humanitas bookshops, in OMV gas stations and at Radio Hall's ticket office.


Translated by Mihai Irina and Ioana Săbău
MTTLC, the University of Bucharest
Return to archived Events