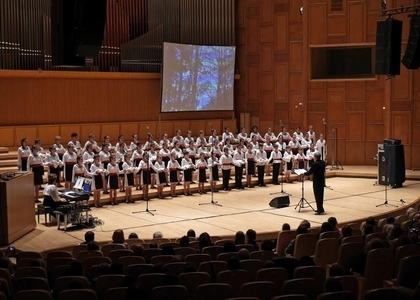 Tuesday, 6 October 2015 , ora 9.31
The Romanian Radio Children's Choir conducted by Voicu Popescu will perform along with other eight choral ensembles at one of the most prestigious choral competition's finals - LET THE PEOPLES SING in München. This competition is a highly appreciated vocal music event under the patronage of the European Broadcasting Union. The participation of Radio Romanian Children's Choir at this international competition was sponsored by BRD - Groupe Société Générale, Eurolines Romania, Vodafone Romania Foundation, Carrefour Romania.

On Sunday, 11th October, 2015, the Romanian Radio Children's Choir conducted by VOICU POPESCU will perform during the finals of the competition in München within the Chilren & Youth Choirs category in a public concert held in Studio One of the Bavarian Broadcasting. The event will be broadcast live on the BR-KLASSIK radio station and submitted to the Euroradio 2015-2016 Season. For the very first time in this competition's history, the video of the finals will be broadcast live on the websites of the radio stations included in the European Broadcasting Union. Therefore, you will be able to watch the video of Romanian Radio Children's Choir's performance live on the Radio Romania Culture and Radio Romania Music websites.

The programme of the Romanian Radio Children's Choir includes two works - Salve Regina by Javier Busto and Ofranda copiilor lumii (Homage of the Children in the World) by Sabin Păutza, during which they will also perform a choreography that was conceived by the members of the ensemble themselves.

On Saturday, 10th October, prior to the competition's finals, Romanian Radio Children's Choir is invited to perform at the festival dedicated to choral music in München, which is also organised by the Bavarian Broadcasting. Some of the choirs that were qualified to the finals will perform as well, including Chor des Bayerischen Rundfucks and two of the winners of the 2013 edition in Luxembourg - Voices in Time and the Amics de la Unió children's choir. The Romanian Radio ensemble will perform four works at the festival - Mihai Moldovan's Oșeneasca (Song from Oaș), Gabriel Fauré's Cantique, Dragoș Alexandrescu's Tatăl nostru (Our Father) and Anton Zeman's Joc din Oaș (Dance from Oaș).

The Romanian Radio Children's Choir will have its 70th anniversary in 2015. The event was already celebrated both through their participation at the 'Evmelia' International Music Festival on 25th April, 2015 at the Radio Hall, when they held the anniversary concert entitled Seventy Springs, and their presence at the 'George Enescu' Festival. The Radio Romanian Children's Choir is presently conducted by Voicu Popescu. Pianist Magdalena Faur, who usually accompanies the ensemble's rehearsals and concerts, has been working with the choir since 2014. The young artists have participated at over fifty international festivals, tours and competitions in almost every European state, but also in Japan, USA and Canada, which brought them valuable distinctions and prizes, such as the title awarded by the European Choral Association of CULTURAL AMBASSADORS OF THE EUROPEAN UNION.

The LET THE PEOPLES SING competition is held every two years. It started in 1961 as a national competition under the patronage of the BBC, but it became international in 1966, when the European Broadcasting Union started proposing the competitors.

The semi-final of the competition was held on 22nd and 23rd January, 2015, in München. Out of the nineteen choral ensembles that had been proposed by thirteen of the affiliated European Broadcasting Union members to perform during this stage, the international jury selected nine ensembles coming from Denmark, Romania, United States of America, Austria, Germany, Latvia, Sweden, Bulgaria and Great Britain. The Bavarian Broadcasting in München, Germany is the organiser and the coordinator of the 2015 edition of this competition for amateur choirs.


Translated by Ioana Săbău
MTTLC, the University of Bucharest
Return to archived Events