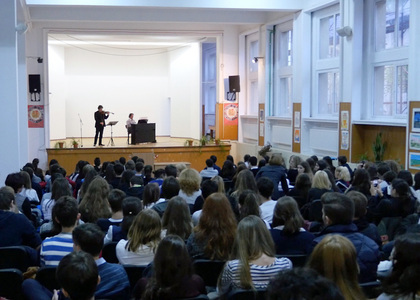 Tuesday, 20 October 2015 , ora 9.27
Inspired by the example set by Enescu, who used to travel with his Guarnieri del Gesù violin made in 1730 all over the country, including war zones, hospitals, villages, everywhere his music was mostly needed, but people scarcely had the occasion of enjoying it, violinist Gabriel Croitoru and pianist Horia Mihail are travelling to some rural settlements and cities in Romania to hold many performances.

The 'Enescu's Violin' National Tour, which is organised by Radio Romania under the patronage of the Cultural Media Centre, takes place between 22nd October and 3rd November, 2015. Violinist Gabriel Croitoru will have the honour of playing George Enescu's Guarnieri del Gesù violin (provided by the 'George Enescu' National Museum), while Horia Mihail will play a digital piano that the two instrumentalists will travel with.

The two musicians have just arrived back from the 'Duel of the Violins' National Tour that was held on the greatest national stages in front of a well-acquainted audience. This time, they are travelling to Romanian villages in which this sort of events does not usually take place, as well as some cities. The programme that they prepared is an attractive one; it includes well-known works that everyone who wants to listen to high quality music will enjoy.

The two great soloists' experience within the last years was an exciting one. Despite all obstacles, they hold this tour every year. The enjoyment of audience members in rural areas was equal to that of people who afford go to the great concert halls, even if they had never attended a concert or seen an instrument before. Although they came to the concert in horse-drawn carriages, not limousines, and were not dressed elegantly, but wore plain clothes, they still enjoyed the performance of the two musicians.

'I think that we are starting to get used to this atmosphere which is different from the one in a regular concert hall. It's not common to have audience members that are not familiar with this kind of music. I am really glad that we went to their villages. Our intention is to draw at least some of them towards this type of music.' - Gabriel Croitoru

'The great number of people who attended these recitals impressed me. Some of them had never seen an instrument before, so they wanted to touch them. I am sure that the purpose of these Radio Romania projects is to educate the young generation and bring quality music closer to them. People in rural settlements rarely have the occasion to listen to this kind of music, unfortunately.' - Horia Mihail

For further information regarding this tour, we kindly invite you to visit the website www.vioaraluienescu.ro.