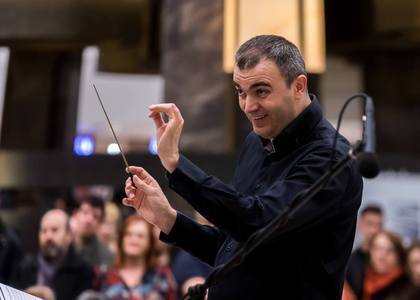 Continuing the tradition set up during the previous seasons, the National Radio Orchestra invites you to a special concert dedicated to the Radio Romania Day around 1st November. 87 years ago, on 1st November, 1928, there was the first broadcast of the public radio service of the Radiotelephone Broadcasting Society, an institution that today bears the name of the Romanian Broadcasting Society - SRR (known under the brand name of Radio Romania).

The anniversary concert on Friday, 30th October, at 19:00, at the Radio Hall -- under the baton of Adrian Morar, conductor of the Romanian National Opera in Cluj-Napoca - will present you Twilight Autumn, the work of the Romanian composer and conductor Alfred Alessandrescu. This time, the musician's name is closely connected to this anniversary as he conducted the Radio Symphony Orchestra (now the National Radio Orchestra) between 1933-1959 and was the Musical Director of the Romanian Broadcasting Society between 1933-1938 and 1945-1947.

The programme will also present one of the most popular violin concerts created by Beethoven: Concerto in D major for Violin and Orchestra, performed by Cristina Anghelescu, soloist of the Radio Orchestras and Choirs.

In the second part of the evening, the National Radio Orchestra offers two more compositions - the Academic Festive Overture and Variations on a Theme by Haydn - signed by another 'titan' of the German repertoire: Brahms. The first work was composed by Brahms in gratitude for the University of Breslau (Wrocław - the Polish name) in Poland, one of the oldest educational institutions in Central Europe, founded in 1702. Variations on a Theme of Haydn was performed by the Vienna Philharmonic Orchestra under Brahms's baton in 1873.

Adrian Morar has been the conductor of the Romanian National Opera in Cluj-Napoca since 1995, and has collaborated frequently with the lyric theatres and philharmonic orchestras in our country; he made his debut at the Bucharest National Opera in 2001, and during the 2006-2007 season, he was the artistic director of the institution. He also conducts performances at the musical theatres in Iași, Constanța, Timișoara and Craiova quite often; he is often the guest of the Philharmonic Orchestras in Iași, Cluj, Ploiești, Craiova, Sibiu, Brașov, Botoșani, Timișoara, Târgu Mureș and Satu-Mare and collaborates with the Radio Orchestras in Bucharest.

Cristina Anghelescu comes from a family of musicians and began studying the violin with her father, who guided carefully and professionally her artistic training and career. Cristina Anghelescu was invited to perform in famous concert halls, such as, Schauspielhaus in Berlin, the Tchaikovsky Concert Hall in Moscow, el Teatro Monumental y Auditorium in Madrid, the Smetana Hall in Prague, St. John's Smith Square in London, Finlandia Hall in Helsinki and with some major orchestras from Dresden, Paris, Prague, Bratislav, Caracas, Moscow, Budapest, London, etc. She went on numerous tours both in all European countries and in Taiwan, North and South America, South Africa, etc.

You can listen to this concert live on all Radio Romania Culture and Radio Romania Music frequencies all over our country and in streaming live on the websites: www.radiorormaniacultural.ro and www.romania-muzical.ro.

The tickets are available on the website: www.eventim.ro, in the Germanos, Orange, Vodafone, Domo and Carrefour shops, at the Cărtureşti and Humanitas bookshops, at the OMV gas stations and at the Radio Hall box office.