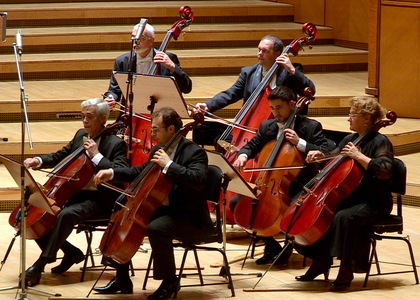 100% MOZART Concert at the Radio Hall

Radio Orchestras and Choirs reaffirmed their 'promise' made to the audience at the beginning of this season, and invited to the Romanian Radio Hall young musicians who have perfected their artistic training abroad and are already cheered on the international stages. This time, the concert to be performed by the Radio Chamber Orchestra under the baton of CRISTIAN BRÂNCUŞI, its conductor, on Wednesday, 4th November at 19:00, gives you the chance to listen to one of the famous Romanian pianists of the new generation, in a 100% MOZART concert held in Bucharest.

DINU-MIHAI ŞTEFAN, aged only 28 years old, graduated from the 'Dinu Lipatti' High School of Music in Bucharest and later pursued higher education studies in prestigious European institutions: Trinity Laban Conservatoire of Music and Dance (London) and Royal College of Music (London). The young pianist has participated in a number of induction courses at some important music schools in Europe: the University of Music and Dramatic Arts Mozarteum in Salzburg and the Birmingham Conservatoire in the UK.

He won several international awards, such as, the 3rd Prize at the Hastings International Piano Concerto Competition (UK) in 2010. He has already performed in several cities in the United Kingdom, Austria, France and Romania. In May, 2014, Dinu-Mihai Ştefan released his first album, Just Another Spring in London, which includes scores by Bach, Liszt, Scriabin and Enescu. The second album - Made in Trinity - includes works by Beethoven and Rachmaninoff.

During the event at the Radio Hall, the young Romanian pianist will perform Concerto no. 14 in E-Flat Major for Piano and Orchestra, by Mozart. The whole evening is dedicated to the genius of the one who composed more than 600 works in only 35 years of life, creating the first scores when he was only 5 years old ! Out of the 41 symphonies that Amadeus composed, the Radio Chamber Orchestra concert will offer you Symphony No. 28 in C Major and Symphony no. 40 in G Minor.

The event's programme is under the baton of CRISTIAN BRÂNCUŞI, founding member of the Radio Chamber Orchestra and its chief conductor. Since 1990, the artist performed hundreds of concerts - along with the ensemble - with a varied repertoire from pre-classical works to contemporary creations. Equally attracted by avant-garde music, he has been often invited to conduct both at the The International Week of New Music Festival and the one entitled Worldmusic Days.

His work as a conductor includes: recordings for the radio, television and films, for the Electrecord recording house and AKSAK (France), symphony concerts and opera performances. He was also appreciated for the concerts he conducted abroad, in Italy and Germany, Poland, Russia, Philippines, the USA, Spain, Venezuela, Uruguay, etc.

You can listen to this concert live on all Radio Romania Culture and Radio Romania Music frequencies all over our country and in streaming live on the websites: www.radiorormaniacultural.ro and www.romania-muzical.ro.

The tickest are available on the website: www.eventim.ro, in the Germanos, Orange, Vodafone, Domo and Carrefour shops, at the Cărtureşti and Humanitas bookshops, at the OMV gas stations and at the Radio Hall box office.