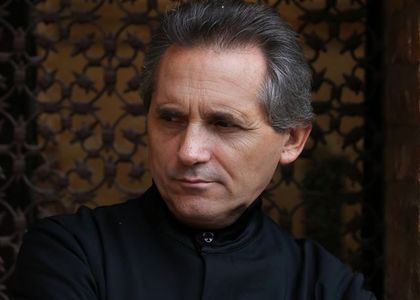 Thursday, 26 November 2015 , ora 12.36
Friday, December the 4th (7 pm), Radio România in collaboration with the French Institute of Bucharest presents in Sala Radio an event created specially as a tribute to the music of the French composer CLAUDE DEBUSSY, concert conducted in association with MIHAELA MINGHERAȘ-COUTURE, a soprano who has settled in France where she has an important artistic career. She has performed on stages like that of The Comic Opera of Paris or at Théâtre du Châtelet. The concert held by The National Radio Orchestra will also enjoy the presence of the conductor VALENTIN DONI, under whose baton most of Romania's philharmonics have flourished, but also the symphonic orchestra from Avignon (France), Perozavodsk (Russia) or Baden-Baden (Germany). You will also give a good hand for the mezzo-soprano ANTONELA BÂRNAT who is acclaimed for her performances on the stage of The National Opera of Bucharest, as well as being appreciated for her vocal-symphonic repertoire.

The French composer Claude Debussy (1862-1918) was strongly influenced in his creation by the symbolist poets (who were his contemporaries) and in many musical compositions he transcribed nature's poetry into music. In the concert in Sala Radio, which are from Debussy's repertoire, the two lyrical artists are accompanied by Corul Academic Radio (instructed by Dan Mihai Goia) will interpret La Damoiselle élue, the score being conceived under the influence of Wagner's music. The work is based on the most famous poem of the English poet Dante Gabriel Rossetti and it described the feelings of a female spirit who contemplates from Heaven her lover left behind on Earth. During the evening programme you will also listen to "The Sea", one of the most played pieces from Debussy's repertoire, an exquisite musical journey on the expansion of a marine landscape which is divided in 3 symphonic sketches: "From dawn till dusk on the sea", "Wave game" and " The dialogue of wind and sea." The concert will close with the musical paper of the Russian composer Serghei Rachmaninov - Symphonic dances.

MIHAELA MINGHERAŞ - COUTURE now lives in France, and has collaborated with conductors as: Lawrence Foster, Guy Condette, Richard Bradshaw, Friedrich Pleyer, Cyril Diederich, and among soloists she has worked with are: Leontina Văduva, Giovanna Casolla, Gregory Kunde, etc. Mihaela Mingheraș-Couture is interested in shaping young generations of musicians and is always invited to teach classes of interpretative artistry in France, United States of America, Lebanon and Holland. Being a finalist of the World Opera Competition from Toulouse and from Belvedere (Vienna) the soprano won a grant from The Telecom France Foundation that allowed her to improve herself whilst under the directory of two important names from lyrical arts: Vera Rózsa and Ileana Cotrubaș. She was acclaimed in the role of: Susanna from The Marriage of Figaro, Marguerite from Faust, Micaela from Carmen, Zerlina from Don Giovanni, Papageno și Pamina from The Magic Flute, etc.

Mezzo-soprano ANTONELA BÂRNAT was appraised (between November 2005 till July 2013) on the stage of the National Opera from Bucharest in a variety of roles. In October 2010 she participated in a tour through Switzerland, Germany and France, in which she promoted the Oresteia II-Choëphoroe opera signed by Aurel Stroe. She was invited on many accounts to the Opera Festival Gut Immling from Germany. She collaborated with the conductors: Horia Andreescu, Ludovic Bacs, Marek Janowski, Cristian Mandeal, Mark Mast, Adrian Morar, Clark Rundell, Julien Salemkour, Alexandru Samoilă, Tiberiu Soare, Jin Wang. She was awarded second prize in the International Opera Competition "Maeştrii artei lirice" - Magda Ianculescu, Bucharest, third prize in "Malmö Singing Competition"(2007), Sweden, and first prize in Rhodos, Greece in the "International Contest for lyrical soloists" (2003).

The concert can be listened to live on all the Radio România Cultural and Radio România Muzical frequences from all around the country or in live stream on the internet on the link: www.radioromaniacultural.ro and www.romania-muzical.ro. Tickets are available on www.eventim.ro or in stores: Germanos, Orange, Vodafone, Domo, Carrefour, bookstores: Cărtureşti, Humanitas, and OMV gas stations or the ticket office of the Sala Radio. For further information concerning Orchestrele şi Corurile Radio we advise you to consult the site www.orchestreradio.ro or www.orchestreradio.com.


Translated by Ioana Agafiţei
MTTLC, the University of Bucharest
Return to archived Events