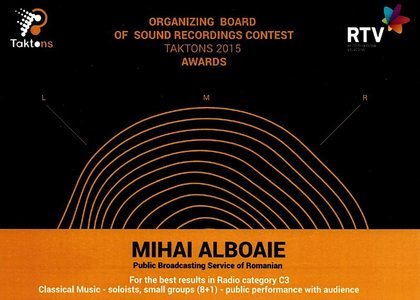 Tuesday, 24 November 2015 , ora 13.16
In the period of 18th -21st November 2015, it took place the fifth TAKTONS edition, international competition in the domain of professional sound records made in the radios and in public televisions, organised by the public audio-visual service Voivodina.

For the third consecutive edition, the team Radio Romania was awarded, thus this year it received the following awards:

The purpose of the TAKTONS competition is to obtain an evaluation and a recognition of the achievements from the domain of sound profesional records for a period of two years. At this competition were enlisted over one hundred records from ten countries, such as the media public services from: Macedonia , Slovenia , Croatia , Bosnia - Herzegovina , Montenegro , Slovakia , Romania, Austria, Hungary and Serbia.


Translated by Oana Diaconu
MTTLC, the University of Bucharest
Return to archived Events