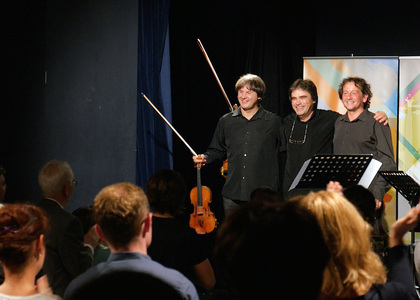 Wednesday, 25 November 2015 , ora 11.03
"The Violin Duel" and "Enescu's Violin", Radio România's projects that have filled the concert rooms from our country this autumn, will now bring joy to spectators from three major Spanish cities: Madrid, Barcelona and Zaragoza, on the occasion of Romania's National Day. The Romanian Cultural Institute from Madrid, together with The Romanian Spanish Embassy, The General Consulate of Romania from Barcelona, The Consulate of Romania from Zaragoza and in partnership with Radio România will organize three violin and piano concerts between the 25th and 30th on November.

The Violin Duel: Stradivarius vs. Guarneri at Zaragoza and Madrid

The concerts from Zaragoza, from the 25th of November, and Madrid, from the 28th of December, are resuming the successful tour of The Violin Duel: Stradivarius vs. Guarneri that the violinists Gabriel Croitoru and Liviu Prunaru, accompanied by the pianist Horia Mihail, have performed in 11 cities in Romania and the Republic of Moldova. The duel is only a pretext to combine the performances of two legendary instruments and the craftsmanship of established concert performing names in a spectacular concert, and the competition could have only one winner - the audience.

Gabriel Croitoru will perform with "Catedrala", a violin dating from 1731 that holds the signature of the violin maker Giuseppe Antonio Guarneri and that also belonged to the composer George Enescu, while Liviu Prunaru will perform with Stradivarius violin "Pachoud" from 1694. The program of the concerts from the Auditory of Zaragoza and CaixaForum from Madrid will include the works of composers such as Niccolo Paganini, Joachim Raff, Antonio Bazzini, Henryk Wieniawski, P.I. Tchaikovsky, F. Kreisler - Chopin, A. Khachaturian, Isaac Albeniz, Pablo de Sarasate - Chopin, Igor Alexandrovici Frolov, Carlos Gardel, Angel Villodo, Augusto Berto and Gerardo Matos Rodriguez.

Enescu's Violin in concert at Barcelona

Following Madrid and Zaragoza, Gabriel Croitoru and the pianist Horia Mihail will accompany the public in a unique musical journey at Barcelona, in the CaixaForum auditory, on the 30th of November, where they will interpret the works of Edvard Grieg, George Enescu, Edward Elgar, Heinz Provost, Fritz Kreisler and Pablo de Sarasate.

Liviu Prunaru, the concert master of the Royal Concertgebouw Amsterdam ensemble, performs as a soloist along with renowned orchestras such as Royal Philharmonic Orchestra, London Symphony Orchestra, Orchestre National de Belgique, the Mayo Orchestra from Buenos Aires, or the chamber orchestra from Indianapolis. Either as a soloist or in recitals, the violinist performs frequently in all the major cities of the world and is invited to prestigious festivals such as the ones from Brussels, Buenos Aires, Evian, Athens, Salzburg and Bucharest. The violinist has recorded numerous CDs with the Camerata Lysy ensemble.

Gabriel Croitoru is well-known in the Romanian music scene of the last years, in the triple posture of soloist of the Philharmonic of Ploiești, member of the Transylvanian Quartet of the Cluj-Napoca Philharmonic and college professor at the National Music University of Bucharest. He appeared as a soloist in the company of some important orchestras such as The London Royal Philharmonic, "Gewandhaus Orchester" Leipzig, the symphonic orchestras from Monte-Carlo, Thessaloniki, Malaga, Sevilla, Cannes, Lyon or the Philharmonic from Cannes. His virtuosity has been rewarded with numerous awards at international competitions, among which the "Tibor Varga" competition from Sion, the "N. Paganini" competition from Genoa and the "Fritz Kreisler" competition from Vienna.

The pianist Horia Mihail has performed concerts, solo recitals and chamber music recitals in 18 countries, he collaborated with well knows artists such as Roman Totenberg, Lory Wallfisch, Robert Merfeld, Peter Zazofsky, Andres Diaz and Nathaniel Rosen. Since 2002, Horia Mihail has been the soloist of the Philharmonic of Brașov and member of the renowned "Romanian Piano Trio" band, along with the violinist Alexandru Tomescu and the cellist Răzvan Suma, together with whom he held a series of successful concerts in the country and abroad. In April 2011, Horia Mihail has carried out a national tour of solo recitals with a full Franz Liszt program entitled "The travelling piano. Following the steps of Franz Liszt", followed by similar tours in the next three years and accompanied by the editing of some Liszt and Beethoven music CDs.


Translated by Silvia Buzatu
MTTLC, the University of Bucharest
Return to archived Events