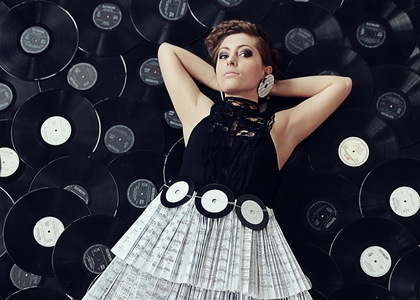 From Helsinki to Bucharest: Elena Mîndru plays jazz with the Radio Big Band

Friday, 4 December 2015 , ora 13.07
The concert of the Radio Big Band, presented within the holidays, at the Radio Hall, brings a beautiful musical gift to all the jazz lovers! On Thursday, 10th of December (19:00), together with the Radio Romania Band, under the baton of the conductor and successful composer Ionel Tudor, you will listen to the jazz soloist Elena Mîndru that will perform on the stage of the Radio Hall. The soloist is established in Helsinki, Finland. She will perform at the Radio Hall a number of her own compositions and jazz standards. As usually, within the number of concerts presented monthly by the Radio Big Band, with the title of 'Romanian Jazz', the evening will be presented by Florian Lungu, a Romanian Jazz 'Personification' himself, whose career dedicated to this genre represented thousands of radio transmissions and TV, a great number of published articles, many festival presentations and jazz concerts, and also a few compositions performed by soloists and famous groups.

ELENA MÎNDRU got in 2012, in Switzerland, the second prize and the audience`s prize at the famous Montreux Jazz Voice Competition, the jury being moderated by Quincy Jones. The young artist has prepared for a beautiful jazz career in famous European schools: she is holding a master's degree in jazz performance and composition obtained in 2013, through the programme Nordic Master of Jazz (NOMAZZ), she studied jazz at the Royal Academy of Music - Denmark, the Royal College of Music, Stockholm - Sweden and the Sibelius Academy of Helsinki - Finland and currently she is a PhD candidate in the Department of Jazz of the last institution mentioned above.

The vocalist represented Radio Romania Culture as a soloist of the EURORADIO Jazz Orchestra of Prague, in October 2014, and Yle Radio (Finland) within the European Jazz Competition - EJC, in June 2015, in Rotterdam, both projects being organised by the European Broadcasting Union.

In 2014, the artist launched her second jazz album: Evening in Romania. She reunites with her voice a jazz quartet composed from four Finnish musicians, all of them being graduates of the Sibelius Academy. In May 2014, the quintet won the Young Nordic Jazz Comets Finland competition, and in June 2015, Elenei Mîndru`s group represented the Finnish Radio Yle in the final of the competition EJC from Rotterdam, Holland.

Elena Mîndru initiated and organised the first symphonic jazz concert with a vocal soloist from Romania. The first concert from these series was realised together with "Transilvania" Philharmonic State Orchestra of Cluj, under the baton of the maestro Sabin Păuța, in February 2014. The project of the jazz soloist includes works written by Romanian and Finnish composers, and also works and arrangements written by the artist herself. The number of jazz symphonic concerts continued in June 2015, in Cluj-Napoca, together with the conductor Tiberiu Soare and in September 2015 in Târgu Mureș, together with the State Philharmonic of Târgu Mureş, conducted also by Sabin Păuța.

The soloist has her own house of records (EM Records) with which she proposes to publish as many jazz artists, especially Romanian artists. She has two published discs, at which she adds the most recent album of the Bega Blues Band from Timișoara, in November 2015 and her last album - Elena Mîndru Third Stream Project, in April 2016, recorded in the famous studio Yle M1 of the Finnish Radio.

For the year 2016, Elena Mîndru was requested by Teosto (The Fisnnish Composers Society) to compose two works for the big band, specially dedicated to the assembly Jyväskylä Big Band (JBB), with which she plans a mini-tour in Romania, in the summer of 2016.

The concert can be listened live on all the frequencies Radio Romania Culture and Radio Romania Music from the country and in streaming live on the internet on www.radioromaniacultural.ro and www.romania-muzical.ro.

The tickets will be available on www.eventim.ro, and in Germanos, Orange, Vodafone, Domo, Carrefour shops, in Cărtureşti, Humanitas bookshops, in OMV gas stations and at the booking office of the Radio Hall. For other information regarding the Orchestras and the Radio Choirs please consult the site www.orchestreradio.ro or www.orchestreradio.com.


Translated by Oana Diaconu
MTTLC, the University of Bucharest
Return to archived Events