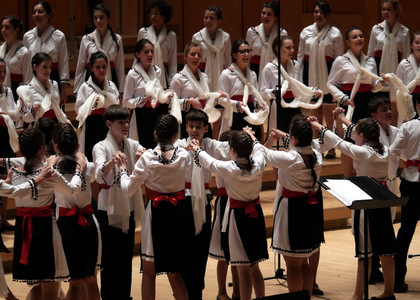 Tuesday, 8 December 2015 , ora 11.54
The crystal voices that are composing the unique sonority of the Children`s Radio Choir will take you , this year, in the fairy tale ambiance of winter holidays, towards the beloved memories of childhood, through the magic of songs and the Christmas carols!

Saturday, 12th of December (19.00), the Radio Romania ensemble, under the baton of conductor VOICU POPESCU, is inviting you to the Radio Hall at an extraordinary Christmas concert. One of the special moments of the event will be the interpretation of the suite A Ceremony of Carols, signed by the British composer Benjamin Britten. The complex work reunites ten plays - with harp accompaniment - and the entire work will be performed in Romania for the first time. Thereafter, the event will be broadcasted through European Broadcasting Union (EBU), during an important media project - Euroradio Special Day of Christmas Music - that will celebrate Christmas with 14 concerts proposed by the public broadcasters, broadcasted for the millions of listeners.

'The Children`s Radio Choir will bring one more time the magic of Christmas with a programme composed of two contrasting aspects: the classic Romanian carol - as composers as Gheorghe Cucu, Nicolae Lungu, Ioan D. Chirescu, Emil Montia have imagined and the Anglo-Saxon medieval song, slightly modernised by John Rutter and Benjamin Britten. I consider that this alternation will be beginning of a gathering full of emotion, in a context where we need peacefulness and also lucidity. ' the conductor of the choir, Voicu Popescu declares.

The Romanian carols that you will listen to are: Sus boieri, nu mai dormiți, La Vitleem colo-n jos, Cetiniță, cetioara dragă, Domnuleț și Domn din cer, together with the famous Christmas song Jingle Bells and other two compositions signed by the contemporary British composer John Rutter. The event will be held with the participation of the pianist Magdalena Faur, and at the harp you will enjoy listening to Iuliana Roșca.

The Christas Concert from Saturday, 12th of December, is presented at the end of an anniversary year for the Children`s Radio Choir, in 2015 being 70th years since the establishment of the ensemble. A tribute brought to this group is also being represented by the Children`s Radio Choir album -70, presented by the 'Casa Radio' Publishing House. At the end of the Christmas concert, the audience will have the opportunity to obtain this compact disc in a 'personalised' version when the conductor Voicu Popescu offers the autographs.

Also on this occasion on Saturday, 12th of December, starting with 17.30, in the foyer of the Radio Hall, will be released an album dedicated to Ion Vanica, the founder and the first conductor of the Children`s Radio Choir, work signed by Mariana Popescu and published under the aegis of the National Choral Association of Romania.

Within the special events of this anniversary year, the choir sang in March 2015 in Greece, Volos, at the opening concert of the International Music Festival Evmelia and it held on 25th of April, at the Radio Hall, an exceptional anniversary concert: 70th spring. At the 2015 edition of the International Festival George Enescu, the ensemble was present at the opening concert, together with the Romanian Youth Orchestra, it participated at the concert of the National Radio Orchestra, with the 8th Symphony by Mahler, and a part of the members of the ensemble sang in Elektra (R. Strauss), at the concert of the Bavarian State Orchestra of Munchen.

On 11th of October 2015 the Children`s Radio Choir participated in Munchen, together with other eight ensembles from the entire world, at the finale of the most famousinternational choir contest: Let the peoples sing, organised by the European Broadcasting Union. On 28th of November the Children`s Radio Choir gave the start to the concerts dedicated to the winter holidays, organised within the Bucharest Christmas Market by the Center of Creation, Art and Tradition ,Bucharest - CREART, with a concert of carols and international songs of Christmas. In order to maintain the same ambiance, the choir held a concert in collaboration with ARCUB, at the Gabroveni Inn on 6th of December.

The tickets are available on www.eventim.ro, in Germanos, Orange, Vodafone, Domo, Carrefour shops, in Cărtureşti, Humanitas bookshops, in OMV gas stations and at the booking office of the Radio Hall. For other information regarding the Orchestras and the Radio Choirs please consult the site www.orchestreradio.ro or www.orchestreradio.com.