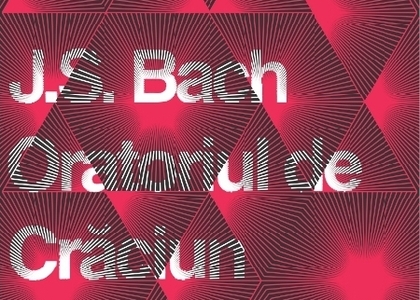 Thursday, 10 December 2015 , ora 10.20
Two of the Radio Romania's ensembles- the Radio Chamber Orchestra and the Radio Academic Choir (conduccted by Dan Mihai Goia) - under the baton of Cristian Brâncuşi, invite you at the Radio Hall on Wednesday, 16th of December, at 7 P.M, to assist a very special Christmas concert! The atmosphere of German gothic cathedrals, where sacred songs vibrate at Christmas time, will be recalled at the Radio Hall, through the interpretation of a famous part signed by Bach: The Christmas Oratorio.

Conceived by the great composer for the Christmas of 1734, the six part oratorio calls the moments of the Scripture forth: The Nativity of the Lord, The Annunciation to the Shepherds, Lord's Worship by the Shepherds, The Baptism of Jesus, The journey of the Magi and Lord's Worship by the Magi. The event counts with the presence of lyrical artists as: Cristina Oltean - soprano, Geanina Munteanu - alto, Tony Bardon - tenor, Cristian Hodrea - bass.

CRISTIAN BRÂNCUŞI is a founding member of the Radio Chamber Orchestra and its main conductor. Starting with 1990, the artist presented hundreds of concerts with a diverse repertoire along with the ensemble , from preclassical works to contemporary creations. Equally interesed in the avant- garde music, he is often invited to conduct at "The Internationl Week of the New Music" Festival, but also at "Worldmusic Days".

The mezzo-soprano GEANINA MUNTEANU has graduated from the European Academy of Baroque Music from Ambronay (France). She worked as soloist for the "George Enescu" Philarmonic, with the conductors: Sergiu Comissiona, Jin Wang, Cristian Mandeal, Horia Andreescu, Ludovic Bacs, Remus Georgescu, Alain Paris, Daisuke Soga, Marc Tardue and so on. She participated in tours in Japan (with Symphony No. 9 by Beethoven), Germany (aires from operas), France and Belgium (Lully- the role of Melisse in Cadmuse et Hermiones).

Soloist of the Romanian National Opera from Cluj-Napoca, the tenor TONY BARDON attended the courses helded by Mariana Nicolesco (Brăila - 2006) and Alberto Zedda, during the Rossini Academy from Zedda (2010). In 2013 he was applauded at the Palace of Arts in Budapest, where he performed the creation Rorate Coeli by Orbán György and shortly after, he performed at Verdi Theatre in Trieste the titulary role of the opera La Clemenza di Tito by Mozart. During the 2014/2015 season, he performed two Mozart operas for the first time, at Regio Theatre- Torino, at Verdi Theatre- Trieste in the opera Il Re Pastore (having the role of Alessandro), at National Sarajevo Theatre in Stabat Mater by Rossini.

You can listen to the live concert on all Radio Romania Culture and Radio Romania Music frequencies from our country and also in live streaming on the Internet, at www.radioromaniacultural.ro and www.romania-muzical.ro.

Tickets are available on www.eventim.ro,

In the shops Germanos, Orange, Vodafone, Domo, Carrefour , in Cărtureşti, Humanitas bookshops, in OMV gas stations and at the Radio Hall box office.