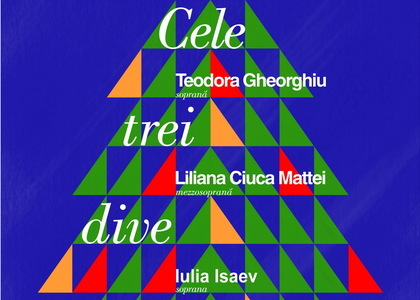 The three Divas - an Extraordinary Christmas Gala at the Radio Hall

Tuesday, 15 December 2015 , ora 13.54
Each year before the winter holidays the main event at the Radio Hall is the concert that has become a tradition of the season and a hallmark of Bucharest cultural scene: THE THREE DIVAS, an extraordinary gala featuring famous opera arias.

Friday, December 18th (7 p.m.), for the fifth consecutive year, together with the National Radio Orchestra, you will have the opportunity to applaud three lyrical artists who have made spectacular careers both in this country and abroad. On this occasion the three great voices are those of: TEODORA GHEORGHIU and IULIA ISAEV - soprano and LILIANA MATTEICIUCĂ - mezzo-soprano. The soloists will be performing under the baton of Italian conductor David Crescenzi, another special guest of the evening being the tenor Ștefan Pop. The event will be held with in collaboration with The Academic Radio Choir, prepared by Dan Mihai Goia.

DAVID CRESCENZI has been appointed as artistic director and principal conductor of the Cairo Opera House as of September 2014. He is a permanent guest of the National Opera House of Timişoara and his resume shows vast artistic experience, like his work at the Theatre of San Carlo in Naples, Cairo Opera House (Egypt) or the "Carlo Felice" Theatre in Genoa, and has collaborated with ensembles like The Zagreb National Opera House Orchestra, The Bologna Chamber Orchestra, Alessandria and Piemonte Philharmonic Orchestras, the Symphony Orchestra of the Teatro Reggio in Parma, etc.

Having received a scholarship from José Carreras himself at the beginning of her career, TEODORA GHEORGHIU has gained numerous artistic achievements performing on the stages of some of the world's most important opera houses. She debuted at the National Opera House of Bucharest in the role of the Queen of the Night (The Magic Flute - W. A. Mozart) after which she continued with performances on important European stages, such as the Théâtre de la Monnaie in Bruxelles, Opéra National de Lorraine in Nancy, Lucerne Theatre, Grand-Théâtre in Genoa, the Lausanne Opera, Théâtre des Champs-Elysées in Paris, etc. In 2004, she debuted at the Vienna State Opera, and was also a member of this institution in the period 2007-2010.

After graduating from the "Gheorghe Dima" Music Academy in Cluj Napoca, LILIANA MATTEI CIUCĂ received a three year scholarship at the Luxembourg Conservatory of Music (graduating with Grand Prix Supérieur), which opened up a new horizon for her artistic career, and in 1997 she was accepted at the Vienna Academy of Music. Her international career began that same year, being invited to perform on the many of the world's great opera stages, such as the Vienna State Opera, Bayerische Oper in Munich, the Paris Opera House, and the opera houses of Monte Carlo, Luxembourg, Liège, Bruxelles, Amsterdam, Madrid, Toledo, Bordeaux, Limoges, Dijon, Berna, Köln, Bologna, Malta, Salonic, Mexico City, Houston, New York.

IULIA ISAEV, a winner of several international competitions, sang in most of the world's great opera houses. Her international debut was in 1992, when she was invited to perform the role of Donna Anna from Mozart's Don Giovanni at Vienna State Opera; she subsequently performed this role at the Opéra National du Rhin in Strasbourg, Bunkamura Hall in Tokyo (in a Peter Brook production), Tokyo National Theatre, the Semperoper Dresden, the Bavarian State Opera in Munich, Teatro dell'Opera di Roma, etc. Her success continued as she performed the role of Mimi in Puccini's La Bohème at Zürich Opera House, Köln Opera House, in Vienna and at Teatro Regio in Turin, and breathed life into the role of Cio-Cio-san from Madame Butterfly on the stage of Teatro La Fenice in Venice and Teatro Sociale di Mantova.

ŞTEFAN POP embodied the role of Alfredo from La Traviata on numerous international stages: the National Opera House of Athens, the Vienna State Opera, the Teatro "Verdi" in Trieste, the Hamburg State Opera, the Frankfurt Opera House, the "Carlo Felice" Theatre in Genoa, the Teatro "Massimo" in Palermo, the National Opera House of Bucharest, the Israel National Opera in Tel Aviv. Ştefan Pop was invited by the soprano Angela Gheorghiu at concerts held in Seoul, Shanghai and also in Muscat and Oman. He had the opportunity to perform alongside Placido Domingo at Covent Garden and at the Verona Arena. In February 2012, Ştefan Pop had his first performance on the stage of the Paris Opera House, in the role of the Duke of Mantua from Rigoletto.

Tickets are available at the Radio Concert Hall, on www.eventim.ro and in Germanos stores, as well as Orange, Vodafone, Domo, Carrefour, Cărtureşti and Humanitas and at OMV gas stations.