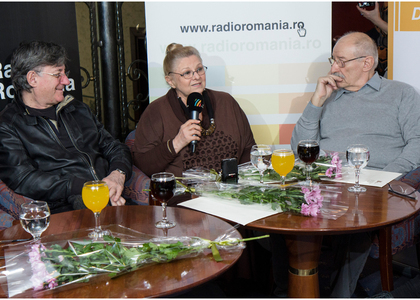 Tuesday, 12 January 2016 , ora 12.52
Radio Romania Media Cultural Center celebrates the National Culture Day on January the 15th 2016, with special events that take place throughout the week, from 11th to 17th of January. Amongst these: a photo exhibition at the Radio Hall, radio drama and special radio transmissions, romanian music and debates about the most important cultural issues of the moment and also live streaming from the events in honor of this day. The exhibition "Radio Romania: Culture, Art & Media" that will be opened in the foyer of the Radio Hall on Wednesday, 13th of January, gets, by means of images, through a story about ideas and projects that came true thnks to the dialogue between books, culture, music and radio: a short visual documentary about the magic of thinking and producing culture at and behind the microphone. The exhibition represents a visual journey across the Radio Romania Media Cultural Center projects, a public radio platform for culture, music, art and media, that frames a cultural offer of great diversity: from radio broadcasts on Radio Romania Culture frequencies and Radio Romania Music to live streaming music within the Radio Hall season, starting with the GAUDEAMUS Fairs from Bucharest and from the rest of the country, up until the radio drama, from audio-book and CD releases at "Casa Radio" Publishing House to national and international tours.

For the third year in a row, "Casa Radio" Publishing House and Radio Romania Culture celebrate the National Culture Day through a series of special editions, broadcasted throughout the Crossover Morning live streamed radio transmission, from the 11th until the 15th of January (between 9.00 and 9.55), by Maria Balabaş and Daria Ghiu.The protagonists are the fairytales and the stories. How do we retrospect to the fairytales nowadays? What message do they send to us? How current are they and what do the contemporary fairytales tell us, instead? The starting point consists of the fairytales and the stories published by the"Casa Radio" Publishing House in the series "Good night, children!" and also in the hors collection of six CDs: "Once upon a time. Tales and stories.", interpreted by Ion Caramitru, Mariana Mihuţ, Victor Rebengiuc.

The National Radio Drama included a series of special plays in the cultural programmes of Radio Romania broadcasting stations, in honor of the events.

All of these represent a journey through the complete works of Mihai Eminescu, who was not only a poet, but also a prose author, dramatist, folklorist, journalist and moreover, actor, prompter, and therefore, a big admirer of the boards.

At Radio Romania Culture, you can also listen to the cycle "Biographies, memories", host to the series of illustrative performances: "An everlasting friendship: Eminescu - Creangă". Director: Constandina Brezu, "The eyes of the Archangel from the dream - A poetical biography of Mihai Eminescu", an abridgment of a poem cycle by Liviu Ioan Stoiciu. Script: Felicia and Gavriil Pinte. Director: Gavriil Pinte.

During the series of the documentary radio transmissions "Biography of a masterpiece", you can listen to the broadcast "Mihai Eminescu: Memento Mori", this week. Script: Elena Tacciu. Recording dating from the year 1974, "Mihai Eminescu: Evening Star". Script: Magdalena Boiangiu and Doina Papp. For more details about the programme, please visit: www.tnr.ro

On January the 15th , 2016, at Radio Romania Music you can hear recordings of famous romanian musicians and works of some of the most important contemporary composers. The celebration begins right at 7.00, when the morning broadcast "Musica viva" strikes up; at 10.00, the listeners of Radio Romania Music are dating the two music- icons of the romanian music culture, George Enescu şi Dinu Lipatti, both of them in a double hypostasis of performers and composers. At 11.00, we remember one of the golden romanian voices of the 20th Century, the baritone Nicolae Herlea.

The radio broadcast "Poliphonies", during which you can usually listen to romanian performers and composers, carries the figure of Eminescu as theme.

Starting with 13.30, you can listen to works inspired by the lines of Mihai Eminescu: the symphonic poem "Evening Star" by Mihai Eminescu, choral works by Radu Paladi, Symphony No. 5 by Anatol Vieru.

The music of George Enescu nowadays: starting with 15.30, during the broadcast "Five stars Concerts", you can listen to the Octet for Strings in C major by George Enescu, performed during the prestigious Salzburg Festival from August 2015 by a number of musicians, amongst which we can find two french violinists with romanian origins: Sarah and Deborah Nemţanu.

Romanian names are also present during the broadcast "The european scene" (21.00 o'clock), that begins with one of the most successful concerts delivered by Radio Romania Music to the European Radio Union: the performance held in February 2007 by the National Radio Orchestra, conducted by Tiberiu Soare, which had an exclusively romanian repertoire.

In the second part of the radio transmission,you can listen to a camera concert, recorded in May 2015 in Germany and starring, amongst others, the romanian violist Răzvan Popovici, appreciated organizer of Sonoro festival from Bucharest.