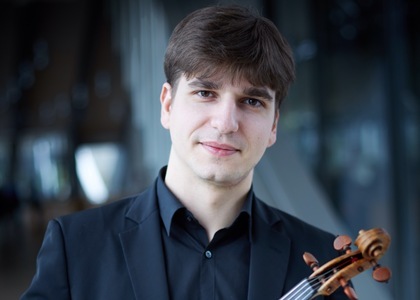 Vlad Stănculeasa playing on the violin that belonged toEnescu - Sanctus Seraphin - at the Radio Hall!

One of the Romanian musicians with an impressive career abroad, the violinist Vlad Stănculeasa - concertmaster at the Gothenburg Symphony Orchestra (Sweden) - is the special guest of the Radio Chamber Orchestra for the concert scheduled on Wednesday, January 20th (19.00) at the Radio Hall. The young Romanian violinist has the privilege of playing on a 1739 Sanctus Seraphin violin, bought by George Enescu with his savings in his student years at Vienna, which he gave to his disciple, Yehudi Menuhin, as a gift, towards the end of his life.

The event is all the more special, seeing as you will be seeing Vlad Stănculeasa in a double role: as soloist and as conductor in a beautiful Bach/Dvořák concert. Vlad Stănculeasa is profoundly connected to the works of George Enescu, to whom he has dedicated his first album. The violinist has been awarded 3rd place and the Enescu Award for his performance of Impressions from Childhood (written by the Romanian composer) at the George Enescu International Competition (2007). Before taking his position as concertmaster at Gothenburg, Vlad Stănculeasa was guest concertmaster at the Basel Chamber Orchestra.

Vlad Stănculeasa is a soloist of the Lysy Camerata, he has often performed on famous stages such as Victoria Hall (Geneva) and Casino (Bern) and was invited to perform at numerous international festivals.

The evening will begin with one of the famous works by Bach: The Brandenburg Concerto no. 3 - part of the six-concert series considered to be among the most valuable orchestral works of the baroque period. This piece will be followed by the Violin Concerto in E major by Bach, the musician unanimously admired by all of the world's great composers, regardless of period. Berlioz famously said "Bach is Bach, as God is God", and Debussy confessed that the German composer is "a benevolent god to which all musicians should offer a prayer to defend themselves against mediocrity".

The second part of the concert at the Radio Hall is centered around the great Czech composer Antonín Dvořák, presenting before the public two of his works: Romance for Violin and Orchestra in F minor and the Czech Suite in D major. Born in a small village in Bohemia, North of Prague, by the Vltava River, Dvořák was heavily influenced by the local folklore in his musical compositions.

The concert can be heard live on all frequencies of Radio Romania Culture and Radio Romania Music and will be streaming live on www.radioromaniacultural.ro and www.romania-muzical.ro.

Tickets are available on www.eventim.ro, in Germanos shops as well as Orange, Vodafone, Domo, Carrefour, Cărtureşti, Humanitas, in OMV gas stations and at the Radio Hall box office.