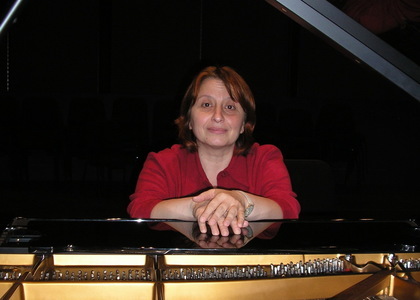 PEER GYNT Suite No.1 - A Dana Borșan Recital at the Radio Hall

Friday, 22 January 2016 , ora 13.01
Wednesday, January 27th (19.00), the pianist DANA BORȘAN - a soloist of the Radio Orchestras and Choirs, who was lauded by her audience in over 900 concerts - invites you to a recital at the Radio Hall, together with four of the National Radio Orchestra musicians (GRAŢIAN PAPARĂ - flute, ADRIAN DUMINICĂ - clarinet, IONUȚ ROȘCA - bassoon, VLAD BUZDUGAN - French horn, and ANA MARIA RADU, oboe).

The event brings before the public one of the most well-known symphonic works: PEER GYNT Suite No. 1, the famous score composed by the revered Norwegian composer of the Romantic era, Edvard Grieg. You will have the opportunity to listen to Joachim Linckelmann's arrangement of the four scores that comprise Suite No. 1, often performed in concerts, but also as soundtrack for films: Morning Mood, The Death of Åse, Anitra's Dance, In the Hall of the Mountain King.

Considered to be the Chopin of the North, Edvard Grieg composed Peer Gynt for the premiere of Henrik Ibsen's play of the same name, which was inspired from a Norwegian folktale, named after the main character.

Dana Borșan has performed in concerts and recitals in the Czech Republic, Germany, Italy, Russia, Slovakia, France, Spain, England, China, Norway, and many others. She is invited every season on the stages of Romanian philharmonic orchestras, and her repertoire includes over 50 concerts, as well as interesting recital and chamber music programs. Although she prefers the works of the Viennese classics and of the great romantics - Schumann, Chopin, Liszt, Brahms - she has made surprising additions to her repertoire, works performed for the first time in Bucharest - The Piano Concerts by Hanns Wolf, Moritz Moszkowski, Siegfried Matthus, Sigismund Toduţă.

In 2006 Dana Borşan and the Radio Chamber Orchestra have developed a project that is unique in the history of Romanian music - The Complete Piano Concertosby Mozart, resulting in live performances, special recordings for the Radio Sound Archive and one album comprising 8 CDs edited by 'Casa Radio' Publishing House. Together with the violinist Alexandru Tomescu, Dana Borșan has also performed the Complete Sonatas for Violin and Piano by Mozart in a series of recitals.

The concert will be broadcasted live on all Radio Romania Culture and Radio Romania Music frequencies and will be streaming live on the internet on www.radioromaniacultural.ro and www.romania-muzical.ro.

Tickets are available on www.eventim.ro, in Germanos shops as well as Orange, Vodafone, Domo, Carrefour, Cărtureşti, Humanitas, in OMV gas stations and at the Radio Hall box office.